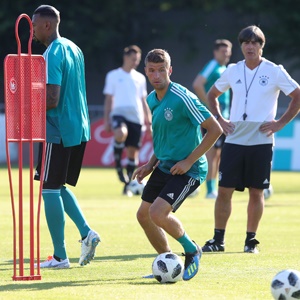 Amsterdam - Thomas Mueller has apologised for his kung fu-style kick to the head of Ajax defender Nicholas Tagliafico which saw the Germany star being sent off in Wednesday's six-goal thriller in Amsterdam.

"No, no - of course I didn't mean to do it," the 29-year-old told reporters over the first straight red card of his career in 462 appearances for Bayern in the thrilling 3-3 draw as both teams progressed to the last 16 of the Champions League.

Mueller said he went to the hosts' changing room to apologise to Tagliafico after the match, but the defender, who scored the home side's 95th-minute equaliser, had already left.

Instead, Mueller wrote "@tagliafico3 - I am very sorry for that what happened yesterday! Was not intentionally (sic). Get well soon" on his Instagram account.

Mueller was sent off 15 minutes from time after trying to control the ball with his out-stretched boot, but succeeded only in kicking the head of Tagliafico, who needed treatment, in a bad-tempered game.

Both Mueller's team-mates and coach said the foul warranted a straight red card.

"Thomas didn't see him," said Bayern boss Niko Kovac, "but it was a clear red - he should have been aware of the opponent."

Earlier in the fixture Ajax had Maximilian Woeber sent off for horror foul on Bayern midfielder Leon Goretzka, who witnessed Mueller's head-high tackle on Tagliafico at close quarters.

"I saw the scene as it happened. You only have to see how the lad looked afterwards - it wasn't good," said Goretzka.

It was a bitter end to the night for Mueller, who made his 105th Champions League appearance, putting him level with ex-Bayern captain Philipp Lahm, who skippered Germany to the 2014 World Cup title.

Mueller will be banned for the first leg of Bayern's last 16 tie in the new year with the draw to be made in Nyon on Monday (13:00 SA time).

The Bavarians claimed the point they needed to finish as Group E winners in an action packed second-half which saw five goals, two penalties and a pair of red cards with Ajax also through to the last 16 as runners-up.

We live in a world where facts and fiction get blurred
In times of uncertainty you need journalism you can trust. For only R75 per month, you have access to a world of in-depth analyses, investigative journalism, top opinions and a range of features. Journalism strengthens democracy. Invest in the future today.
Subscribe to News24
Related Links
Chiefs explain Khune's absence against United
All the Champions League Round of 16 teams
ABC Motsepe side hand Chabangu lifeline
Next on Sport24
UEFA plans for Euro and Champions League unchanged despite pandemic fears