Juventus will be without star attacker Cristiano Ronaldo after the Portuguese tested positive for Covid-19 and will miss Wednesday's Champions League reunion with Barcelona's Lionel Messi.

The 35-year old first returned a positive test in Portugal while on international duty and since returning to Italy has been unable to return a negative test in time for Wednesday's encounter.

The former Real Madrid star is now confirmed to miss a reunion with Argentinian rival Messi with the two having battled it out for the world's best player title for the better part of 15 years.

"Ronaldo had a test like everyone else, this evening (Tuesday) we will have the definitive result," Pirlo told a press conference in Turin before the Champions League Group G game.

"For now it's all on the high seas, when the final result comes everything will be clearer."

According to UEFA rules Ronaldo needed to test negative 24 hours before being allowed to feature.

Ronaldo, who has no symptoms, has already missed three games including his side's 2-0 Champions League win at Dynamo Kiev last week.

The clash would be the first between Ronaldo and Messi since the Portugal forward left Real Madrid for Juventus in 2018.

We live in a world where facts and fiction get blurred
In times of uncertainty you need journalism you can trust. For only R75 per month, you have access to a world of in-depth analyses, investigative journalism, top opinions and a range of features. Journalism strengthens democracy. Invest in the future today.
Subscribe to News24
Related Links
WRAP | Champions League
Baroka hand Black Leopards early season lesson
Kaizer Chiefs record first league win of Gavin Hunt-led era
Next on Sport24
Messi rested for Barca trip to Hungary 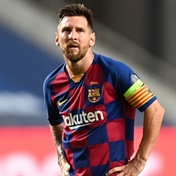