Cape Town - Arsenal manager Arsene Wenger believes their Champions League opponents, Paris Saint-Germain, have an advantage ahead of their clash at the Emirates Stadium on Wednesday.

The Gunners boss pointed out that PSG had an easier fixture heading into the crunch Group A tie, as they beat Nantes 2-0, while Arsenal were involved in an intense 1-1 draw with Manchester United.

"Paris have an advantage, they can manage their games," Wenger told a news conference. "They played against Nantes. They played at 80%, 90%. We played at Man United. We had no room for even 1%.

"The difference in the Champions League is that the teams play offensively, all of them."

A win for Arsenal would see them clinch first position in the group, and Wenger has emphasised the importance of aiming for the top spot.

He added: "I feel guilty when we finish second and we have a difficult tie, so let's finish first. At least we'll have the advantage to play the second game at home."

Both sides sit on ten points after having played four games each which makes tonight's clash a shoot-out for the first spot in the group that could result in a much easier tie in the last 16 knock-out stage. 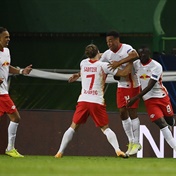