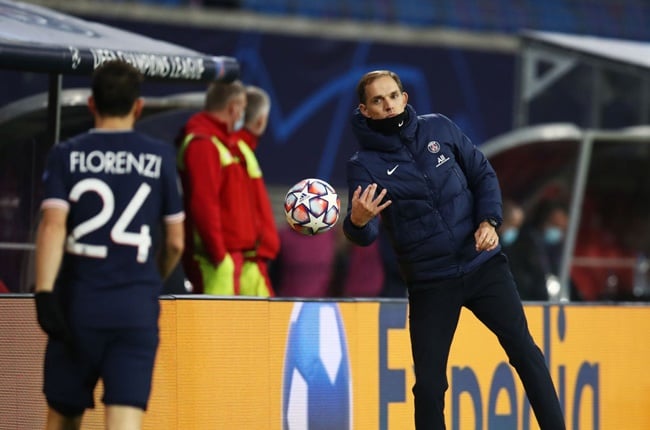 Paris Saint-Germain coach Thomas Tuchel waved away questions over his future after a 2-1 defeat at RB Leipzig on Wednesday dealt a major blow to the Champions League aspirations of last season's runners-up.

Di Maria crucially missed a penalty which would have put the French champions 2-0 up despite them coming to Germany without both Neymar and Kylian Mbappe due to injury, and they ended this game with nine men after the late sendings-off of Idrissa Gana Gueye and Presnel Kimpembe.

It is a damaging defeat for PSG, who beat Leipzig 3-0 in the semi-finals of last season's competition in Lisbon in August.

Less than three months after leading the Qatar-owned club to the final for the first time, Tuchel has overseen a poor start to this season's group stage and speculation is growing that he might not even last until the end of the season when his contract expires.

When asked by French broadcaster RMC Sport if he felt his position was under threat amid reports he does not see eye to eye with sporting director Leonardo, Tuchel replied simply "no".

Tuchel was also pushed on an interview with Sky Germany on the eve of the game in which he implied it was unlikely he would sign a new contract.

"They asked me why the French press are always saying the coach is in danger," Tuchel said.

"But that does not change the job I do with the staff and the players. It won't change anything. It is just the way life is for the coach in Paris -- it is never enough, but I have no problem with that."

PSG have reached the knockout stages in each of the last eight seasons, but their prospects of advancing from a difficult group have not been helped by injuries and now they have lost two group games for the first time in the Qatar era.

Leipzig, who lost 5-0 at Old Trafford last week, are level with United on six points at the halfway stage, with PSG and Basaksehir on three points.

"We were playing a team who were top of the Bundesliga a week ago. We played well and could have been 2-0 up," said Tuchel.

"But if we win 1-0 or 2-0 (against Leipzig in Paris) we will have the upper hand and then we will still have two more games, so it is still in our hands. If people expected us to win 3-0, that is not how it happens."

As well as the two most expensive players in the world, Tuchel is missing other key elements of his squad in Marco Verratti, Juan Bernat, Mauro Icardi and Julian Draxler.

Nevertheless they went ahead when Di Maria ran through to open the scoring in the sixth minute after Moise Kean intercepted a Dayot Upamecano back-pass.

France defender Upamecano was then penalised for handball in the box but Di Maria's 16th-minute spot-kick was saved by Peter Gulacsi.

Di Maria and Kean both had goals disallowed for offside before Leipzig equalised with three minutes of the first half remaining thanks to a former PSG player.

Forsberg's 57th-minute spot-kick then put Leipzig ahead after a Kimpembe handball, and PSG capitulated after that.

Gueye and Kimpembe both picked up second bookings to leave PSG with nine men at the end and without two more players due to suspension for their rematch with Leipzig on November 24, when they will have to improve.

"We gifted Paris two chances at the start, but otherwise they created nothing in open play," said Leipzig coach Julian Nagelsmann, whose team had lost their last two games.

"Our last two defeats were quite hard to take, but we reacted well today."

We live in a world where facts and fiction get blurred
In times of uncertainty you need journalism you can trust. For only R75 per month, you have access to a world of in-depth analyses, investigative journalism, top opinions and a range of features. Journalism strengthens democracy. Invest in the future today.
Subscribe to News24
Related Links
Doctor says Maradona recovering well after brain surgery
Zamalek advances to CAF Champions League final to clash against Pitso Mosimane's Al Ahly
Leipzig come back to leave PSG in trouble in Champions League
Next on Sport24
Chelsea cruise as Werner's penalty double sinks Rennes