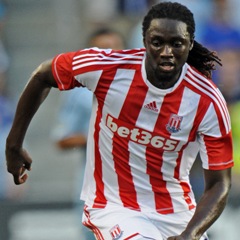 London - Stoke City have signed Nigerian striker Peter Odemwingie from Cardiff City with Kenwyne Jones moving in the opposite direction in a player-exchange deal, the Premier League clubs announced on Tuesday.

Odemwingie, 32, has signed an 18-month contract with Stoke and could make his debut in Wednesday's league game away to Sunderland.

"Things haven't perhaps gone as well for him at Cardiff as he would have hoped and he's really keen to start afresh with us.

"He has a good goal-scoring record in the Premier League and will bring a different dimension to our attacking options. I've no doubts he will prove to be an excellent addition to our squad."

Nigeria international Odemwingie joined Cardiff from West Bromwich Albion last September, but he had to play second fiddle to Fraizer Campbell during his time in the Welsh capital.

"Maybe in the past few months I didn't get too many goal-scoring opportunities but I am sure that will change here at Stoke," Odemwingie told the Stoke website.

"I feel I am a different player to Kenwyne Jones. He is more of a target man but I am somebody who likes the ball at my feet and I also like to get in behind the defence as often as possible, too.

"I am sure that the manager and his staff know about me and I am certain they will use me to my strengths."

Cardiff confirmed the arrival of 29-year-old Jones on their website.

"Cardiff City Football Club are delighted to announce that Kenwyne Jones's move from Stoke City to the club has today (Tuesday) been finalised, subject to FA (Football Association) clearance," the club said in a statement.

"The striker will be available for selection for the first time this Saturday in the Barclays Premier League home game against Norwich City."