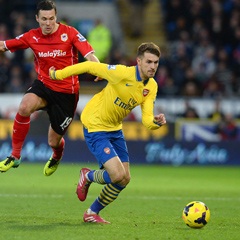 London - Aaron Ramsey's brace inspired Arsenal to a 3-0 win at Cardiff City on Saturday that sent Arsene Wenger's side seven points clear at the top of the Premier League.

The former Cardiff academy starlet, who joined the Gunners as a 17-year-old, bagged a brilliant first-half header and added a second in stoppage time -- his 13th goal of the season -- after Mathieu Flamini had made it 2-0 with a late strike.

It was no more than Arsenal deserved on a day when Ramsey once again proved his worth to the north London club.

The visitors might have taken the lead inside two minutes when Jack Wilshere shifted the ball from right foot to left before striking the Cardiff bar with goalkeeper David Marshall beaten.

Ramsey had been given a warm welcome by the Cardiff fans on his return to the Welsh capital, as home manager Malky Mackay had requested in the build-up to the game.

And though Cardiff did their best to overload the middle third in a bid to snuff out the Welshman's threat, Ramsey was immediately to the fore alongside Wilshere and Mesut Ozil.

An early clash of heads saw Per Mertesacker temporarily leave the pitch and in the Arsenal centre-back's absence, Cardiff almost took the lead when Kevin Theophile-Catherine's measured cross was headed inches wide by Fraizer Campbell.

At the opposite end, there followed one of the season's more bizarre moments.

Wilshere's pass found its way to the feet of Olivier Giroud but with only Marshall to beat, the Frenchman hesitated, expecting the assistant referee's flag to be raised for offside.

There was no flag, however, and Giroud's hesitation gave Steven Caulker enough time to recover himself and clear the danger.

Wenger appeared displeased but it did not deter Arsenal, who continued to dominate.

The breakthrough came in the 29th minute when Ozil picked out Ramsey with a precise cross and the 22-year-old star beat Marshall with a firm header.

His didn't celebrate, giving rise to an extraordinary standing ovation from large sections of the home crowd.

It could have been 2-0 a minute into the second half when Ramsey waltzed his way to the byline and picked out Giroud. This time, the Frenchman was on target with a smart shot but Ben Turner stuck out a leg and cleared to safety.

However, Arsenal were grateful to Wojciech Szczesny a minute later when Campbell's downward header looked destined for the bottom corner, only for the Polish goalkeeper to pull off an outstanding save.

It was Cardiff's most prolific spell of the game, with Peter Whittingham twice having shots blocked before Szczesny dropped smartly to field Theophile-Catherine's shot from distance.

Wenger was quick to emerge from the Arsenal dug-out, doubtless demanding greater urgency and quality in the midfield third.

He was justified in his request as Arsenal were beginning to look a touch vulnerable, but in committing more and more men forward, Cardiff themselves became susceptible to a counter-punch and Santi Cazorla should have done better from eight yards after being teed up by Ramsey.

Cardiff continued to push as they had done in the final moments against Manchester United last weekend. They snatched a late equaliser on that occasion but this time there was to be no repeat performance.

Instead, it was Arsenal who scored a second when Ozil picked out Flamini, who fired the ball into the roof of the net, before Ramsey wrapped things up at the end of a breakaway in stoppage time.