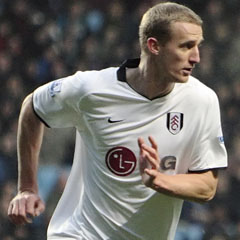 London - Norwegian international defender Brede Hangeland has joined Crystal Palace on Friday after claiming he was told by email by Fulham that he was no longer wanted.

The 33-year-old had also been wanted by Palace's Premier League rivals Hull City, according to British media.

Palace said that Hangeland had signed a one-year contract after six and a half years at London rivals Fulham, who were relegated last season.

"I'm quite old school as a player, I just want to be part of a good group of players, working for a good manager, working really hard and driving something in the right direction," said Hangeland.

"It's a traditional club with a big following. I thought the atmosphere here was fantastic and obviously the fans had a lot to be happy about come the end of the season.

"If we can do something similar to that this season, that would be great," the Norwegian added.

We live in a world where facts and fiction get blurred
In times of uncertainty you need journalism you can trust. For 14 free days, you can have access to a world of in-depth analyses, investigative journalism, top opinions and a range of features. Journalism strengthens democracy. Invest in the future today. Thereafter you will be billed R75 per month. You can cancel anytime and if you cancel within 14 days you won't be billed.
Subscribe to News24
Next on Sport24
Wolves bolster Europa League bid, Blades blunted by Everton