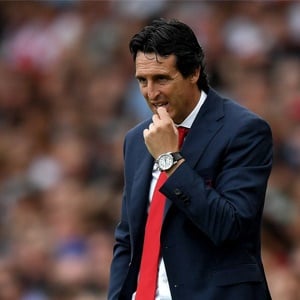 Guimaraes - Arsenal's faltering form continued as a much-changed side limped towards the last 32 of the Europa League with a 1-1 draw at Vitoria Guimaraes on Wednesday.

But Vitoria secured their first point in the group thanks to Bruno Duarte's acrobatic stoppage-time equaliser.

Arsenal remain well placed to reach the knockout stages as they top the group with 10 points from their first four games.

However, another underwhelming performance and result will do little to ease the mounting pressure on manager Unai Emery.

"In this competition our objective is to be first in the group. We are going to play the next two matches to make sure we're in that position," said a defiant Emery.

The Spaniard has been heavily criticised for a run of two wins in nine Premier League games, leaving them six points outside the top four, and Emery prioritised Saturday's vital trip to Leicester with his starting line-up.

Pierre-Emerick Aubameyang was named as Arsenal's new captain on Tuesday after Granit Xhaka was stripped of that responsibility for his angry outburst towards the club's fans when being substituted against Crystal Palace 10 days ago.

However, Aubameyang was not even included on the substitutes bench as Emery made eight changes from the side that started Saturday's 1-1 draw at home to Wolves.

Vitoria came closest to scoring in the first half when Pepe smashed a long-range shot off the underside of the bar.

Arsenal had barely created anything of note but seemed set to get out of jail when Mustafi nodded home Nicolas Pepe's free-kick to give the visitors the lead.

"Everyone wants to show a lot and give everything but sometimes when you are overly motivated, it's difficult to play your game," said Mustafi, who has been restricted to appearances in the Europa League and League Cup this season.

"We just need to play our game, stay calm and then in the final third try to be a bit more intelligent and efficient in our passing."

Going behind summoned a response from the hosts who threw caution to the wind in the closing stages and were rewarded in the first minute of injury time.

Former Tottenham winger Marcus Edwards was the creator as Arsenal failed to clear his cross before Duarte hooked home the loose ball with a bicycle kick.