Coutinho will not be sold - Klopp 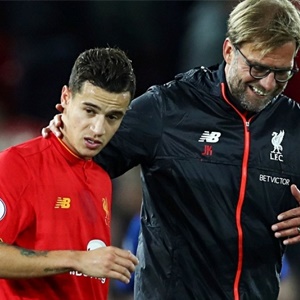 London - Liverpool manager Jurgen Klopp said midfielder Philippe Coutinho would not be sold at any price, as British media reported the club had rejected a second bid worth €100 million from Barcelona.

Barcelona had already been rebuffed last month in an 80 million euro bid for the 25-year-old, who joined Liverpool from Inter Milan for £8.5 million pounds in 2013.

The 24-time Spanish league champions increased the offer to €85 million plus €15 million in add-ons but Liverpool have rejected the second bid, maintaining their stance that the player is not for sale, according to the reports.

"Liverpool is not a club that has to sell players. That is set in stone. So what they offer in the end doesn’t matter," Sky Germany quoted Klopp as saying.

"From a financial standpoint, there is no price limit to let him go. No price at which we are ready to give in. Our goal is to have the best possible team. So we want to keep our guys and add new ones. That is our plan."

The Merseyside club's position on the Brazil international, who was a key player in Klopp's squad last campaign, is boosted by Coutinho's signing of a new five-year contract last season.

While Spanish media have suggested that a deal for Coutinho's move to Barcelona was close to completion, British media say Liverpool have not and will not make any plans to discuss the player's future with the Catalan club.

We live in a world where facts and fiction get blurred
In times of uncertainty you need journalism you can trust. For only R75 per month, you have access to a world of in-depth analyses, investigative journalism, top opinions and a range of features. Journalism strengthens democracy. Invest in the future today.
Subscribe to News24
Related Links
Retired Hudson to join Terriers' coaching staff
Pirates announce Mokwena as assistant coach
Bale tips Man Utd for 'fantastic season'
Next on Sport24
Police call for Premier League cooperation to tackle racist abuse