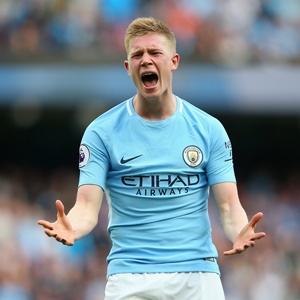 The Belgian midfielder has drawn widespread acclaim with his consistent, high-quality performances for Pep Guardiola's team this season, with some going as far as comparing him to Europe's elite.

De Bruyne has racked up 11 goals and 19 assists across all competitions this season, despite often playing as a deep-lying play-maker, and is considered to be one of the top players in the Premier League, if not the best.

However, the 26-year-old doesn't believe it's realistic to compare him with Messi and Ronaldo, who have scored 35 and 37 goals respectively this season.

De Bruyne told Het Belang van Limburg: "It is impossible to compare me with them. Our positions are completely different.

"They are much higher on the pitch and score ten times more than me.

Guardiola believes it would be difficult to find another player like De Bruyne. He said, according to Goal: "He is not playing like this in just one game. It’s the whole season - every three days - playing that way.

"The way he’s played it’s difficult to find one [like it] in Europe."

We live in a world where facts and fiction get blurred
In times of uncertainty you need journalism you can trust. For only R75 per month, you have access to a world of in-depth analyses, investigative journalism, top opinions and a range of features. Journalism strengthens democracy. Invest in the future today.
Subscribe to News24
Related Links
LIVE: Olympic legend Bolt trains with Dortmund
Lekgwathi: Jali should come back home to Pirates
Buffon happy to be part of new generation
Next on Sport24
WRAP | English Premier League