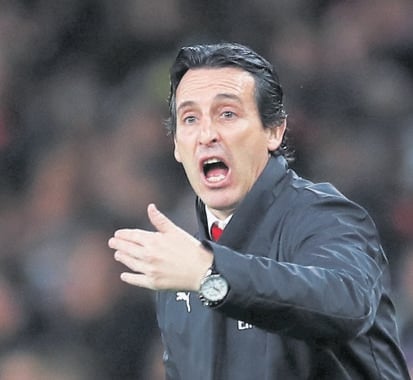 Arsenal manager Unai Emery, pictured during the League Cup in midweek, puts his troops up against Liverpool tomorrow in the highlight English Premier League fixture of the weekend. PHOTO: reuters

Emery's side did not record their first Premier League clean sheet on their travels until April last term and managed only one in the top flight all season.

That wretched run played a key role in Arsenal's failure to finish in the top four.

But Emery has worked hard to overhaul Arsenal at the start of his second season in charge, with a host of new signings and a more determined mentality fuelling the north Londoners' solid effort at St James' Park on Sunday.

While they were only sporadically effective in attack, they remained organised enough at the back to keep Newcastle at bay until Pierre-Emerick Aubameyang fired the second-half winner.

"I want to win, I want to score and I want to do a clean sheet. Today we won and we did that," Emery said.

"The balance offensively and defensively is only taken with the victory. Today in our 90 minutes, we could do that.

"Also, we created chances and we need also to create chances for our strikers and today with Auba, we won."

Asked about his new signings, Emery added: "David Luiz did pre-season with another team and he is OK to play physically, but he only trained completely with us yesterday. On Friday, he did 30 minutes with us.

"Nicolas Pepe came one week ago and physically he needs to get his best fitness to be ready to play 100 percent for 90 minutes. Today, 20 minutes is good for him.

"And Ceballos is in the middle because he came before Pepe, but he got an injury and he stopped training. He needs to know the Premier League, so today was important for him and for us."

Meanwhile, Newcastle manager Steve Bruce was left to rue a key defensive lapse in his first match in charge of the club he supported as a boy.

The 58-year-old could only look on as full-back Ainsley Maitland-Niles intercepted Paul Dummett's attempted pass to substitute Jetro Willems before feeding Aubameyang.

"That's the big disappointment for us all, to lose it in the way we did, a mistake," Bruce said.

"We defended fantastically well throughout the game -- I can't remember my goalkeeper making a save, and that against Arsenal is a big, big positive.

"But we're disappointed that we made a mistake and unfortunately left ourselves open and got punished."

Newcastle, who handed a competitive debut to club-record signing Joelinton, started promisingly and were unlucky not to score when Jonjo Shelvey hit a post, while the Brazilian striker forced a first-half save from Gunners 'keeper Bernd Leno.

"Listen, we have made a genuine mistake. When the pass was too short or whether he hasn't reacted quickly enough, at the end of the day, I can't criticise anybody for making a mistake," Bruce added.