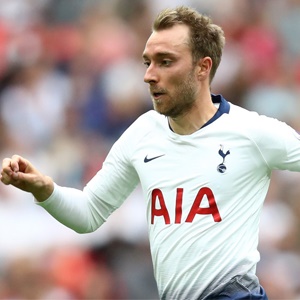 London - Christian Eriksen came off the bench to score the stoppage-time goal that earned Mauricio Pochettino his 100th Premier League victory as Tottenham manager in a hard fought 1-0 win over Burnley.

The struggling Clarets had been seconds away from leaving Wembley with a precious point against Spurs, who had clinched qualification for the last 16 of the Champions League by drawing 1-1 at Barcelona in midweek.

Instead, Spurs can look forward to Monday's last 16 draw in the knowledge that third place in the Premier League table will still be theirs whatever top-four rivals Chelsea and Arsenal do on Sunday.

"We fully deserved to win the game but sometimes in football you don't get what you deserve," said Pochettino, whose side move to within five points of league leaders Manchester City.

"But if you work hard, have patience, and try and try you get the reward, and we got the reward.

"After qualifying for the Champions League, I think it's a massive week for us."

It was always likely that Pochettino would make changes to the starting line up after his side's European heroics, especially as centre-back Jan Vertonghen was ruled out by a thigh problem and Eric Dier was unavailable because of a virus.

Oliver Skipp was the chief beneficiary of the changes, with the 18-year-old midfielder handed his first Premier League start after a couple of cameos off the bench.

However the feel-good factor from a famous night at the Camp Nou on Tuesday wasn't in evidence in the stands, with vast swaths of empty seats as patience over the wait for the club's new stadium wears thin.

Burnley came into the match buoyed by last week's 1-0 win over Brighton, which ended a barren run that had seen them take just one point from a possible 21.

The visitors had the best chance of a lacklustre first-half when Hugo Lloris's misplaced clearance went straight to Phil Bardsley, who teed up Ashley Barnes but could only watch as his teammate headed wastefully over the bar.

Burnley almost broke the deadlock three minutes into the second half from a free-kick when ex-Spurs winger Aaron Lennon's cross was met on the volley by Barnes, only for a combination of Toby Alderweireld and Harry Kane to block.

Joe Hart has rediscovered some of his best form since joining Burnley in the summer after a few lean years out on loan from Manchester City, and the former England number one produced a top-quality stop to deny Erik Lamela from Danny Rose's cross.

Skipp was replaced by Heung-min Son for the last 15 minutes, with centre forward Fernando Llorente soon coming on for Lamela.

The newcomers fashioned a clear chance when Llorente chested Kieran Trippier's cross into the South Korean's path only for Son to fire across goal and wide.

Dele Alli also scuffed wide at the back post as the pressure built. It finally paid off when Kane held the ball up and played Eriksen in for a finish high into the net to leave Spurs just five points off the top of the table.

We live in a world where facts and fiction get blurred
In times of uncertainty you need journalism you can trust. For only R75 per month, you have access to a world of in-depth analyses, investigative journalism, top opinions and a range of features. Journalism strengthens democracy. Invest in the future today.
Subscribe to News24
Related Links
WRAP: Absa Premiership
Leopards end the year on a high after thrashing Amazulu
Kashima Antlers set up Real Madrid World Club semi-final
Next on Sport24
Mourinho says Bale is ready to make his mark at Tottenham 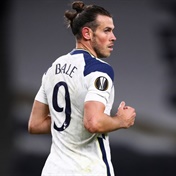