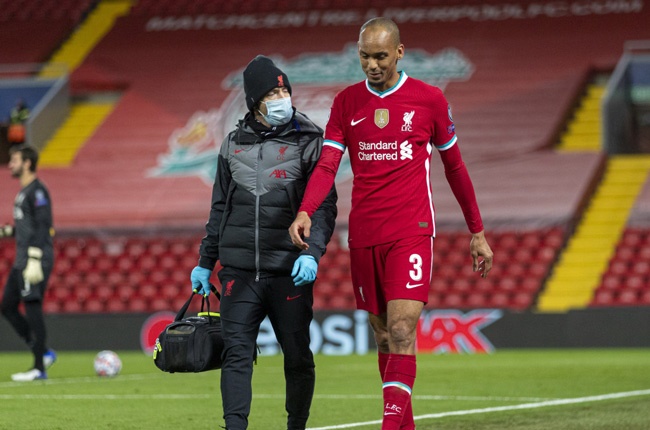 Midfielder Fabinho is set to miss Liverpool's next two matches with an injury but could return for the crucial clash against Manchester City.

The Brazil international has been filling in as an auxiliary centre-back due to the long-term absences of Virgil Van Dijk and Joe Gomez but was sidelined by a muscle problem for Thursday's win at Tottenham.

And while the problem was described as "minor" by Klopp he expects the 27-year-old to miss both Sunday's trip to West Ham and Wednesday's visit of Brighton.

"Minor issues nowadays are at least three games, depending on the week it could be four games," said Klopp, who said midfielder Naby Keita was closer to a return after eight matches out but not in time for this weekend.

"I think the game when Fab could be back is City."

Pep Guardiola's side have recovered from an indifferent start to the season and are currently on a run of 11 successive victories.

Seven of those have come in the Premier League and catapulted them to top spot, with a match in hand, heading into the weekend.

Klopp admits that is an ominous sign in a unique season in which most teams have experienced unexpected results.

It will not require 98-plus points to win the title this year but the Liverpool boss does not know whether it will fall as low as the 75 which saw Manchester United become champions in 1997.

"Will it be the most exciting run-in with different teams around? Could be," he said.

"But City could run away now as well. They are in a good position with games in hand and are playing good football again.

"I don't know if it will be the lowest points total. What we see is it is a difficult season for all teams maybe apart from West Ham, and Leicester look pretty good.

"There are a lot of teams who look good but we all have ups and downs.

"You have to be lucky with injuries to be really on top of things – more than in other years because of the amount of games in a specific period that is for sure.

"But I can imagine watching from outside it is exciting, especially for a neutral fan. I don't know who will be champion."

We live in a world where facts and fiction get blurred
In times of uncertainty you need journalism you can trust. For 14 free days, you can have access to a world of in-depth analyses, investigative journalism, top opinions and a range of features. Journalism strengthens democracy. Invest in the future today. Thereafter you will be billed R75 per month. You can cancel anytime and if you cancel within 14 days you won't be billed.
Subscribe to News24
Related Links
Solskjaer seeks Man Utd cutting edge after Arsenal stalemate
Leaders Milan shrug off Ibrahimovic penalty miss as Juve move third
Man Utd stumble again in Arsenal stalemate
Next on Sport24
Man United banking on Ten Hag to lift mood at Old Trafford