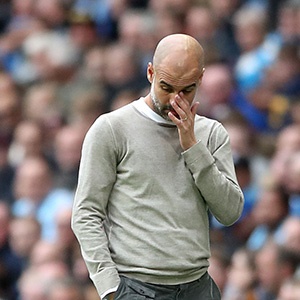 London - Manchester City manager Pep Guardiola has called for European intervention to ease tensions in his native Catalonia since nine pro-independence leaders were sentenced to imprisonment on Monday.

Guardiola has been an outspoken campaigner for the independence movement and was chosen to read out a video message recorded in English by the "Democratic Tsunami" organisation that has been behind public protests in the region in recent days.

On Friday, Barcelona's El Clasico meeting with Real Madrid, that was due to take place in the Catalan capital on October 26, was postponed due to the protests and security fears.

"The international community must help us to solve the conflict between Catalonia and Spain and some mediator from outside to help us sit (down) and talk," said Guardiola on Friday.

"Hopefully, Europe, Britain, help us to resolve this conflict."

After violent clashes between protesters and police over the past four days, Catalonia was gripped by a general strike on Friday as thousands of people converged on Barcelona for a mass show of dissent over the sentences handed down earlier this week.

However, Guardiola said he had no comment to make on the postponement of the Clasico despite his former club Barcelona being opposed to the change.