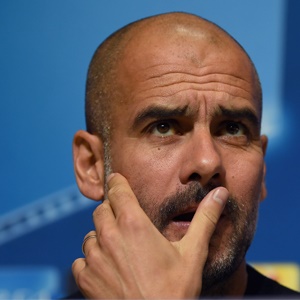 Manchester - Pep Guardiola has promised Arsene Wenger that Manchester City have no chance of emulating his Arsenal team's 2003/04 record of completing a Premier League season unbeaten.

Arsenal were dubbed the 'Invincibles' after becoming only the second team - after Preston North End in 1888/89 - to go through an English top-flight campaign without losing a game.

City are unbeaten after 10 games of the league season, but Wenger has suggested it will be difficult for them to match his side's achievement and City boss Guardiola agrees with the Arsenal manager.

"I would like to say to Arsene that this record belongs to him. We are not going to break it," Guardiola said on Friday ahead of his side's home game with Arsenal on Sunday.

"He has to be calm. He has to be sure that is not going to happen. It was an exceptional team.

"To stay unbeaten in the Premier League is something fantastic. He has to know that we don't want to break this record, but we want to play well and beat them on Sunday."

City have not lost any of their 16 competitive games this season, winning 14 of them and beating Wolverhampton Wanderers on penalties after a draw in the League Cup.

They sit five points clear at the top of the table, but Guardiola played down Chelsea manager Antonio Conte's suggestion that City are on course for the title.

"We are five points ahead of Manchester United," he told reporters at City's Manchester training base.

"How many games are left? Twenty-eight. How many points? Eighty-four. We are five in front. It is nothing.

"If you say that until next May we are going to play like we have in the last two months, I'd say: 'Wow, we have a good chance to win the Premier League'. But who is going to assure me we will not get injuries?

"Even for the best teams in the world it's hard to maintain what we have done over the last two months."

Sunday's game against Arsenal is set to be the first time Alexis Sanchez faces City since a 60 million ($78.4 million, 67.5 million euros) move to the Etihad Stadium fell through at the end of August.

Guardiola refused to be drawn on the prospect of resurrecting that deal, either in January or at the end of the season, when the Chile international's contract runs out.

"The transfer window is closed, so it's not time to talk about that," Guardiola said.

"I have respect for Arsenal and especially for my own players. In the period that the transfer window is open, I leave other people to talk about that.

Guardiola believes City should be wary not just of Sanchez, but also of Mesut Ozil, another point in a three-pronged attack that also features Alexandre Lacazette.

Ozil, like Sanchez, is out of contract next year, but has faced criticism for a lack of goals and assists this season.

"I don't have doubts about him, first in terms of quality," said Guardiola, who came up against Ozil during his time as Barcelona coach.

"I enjoy him and have suffered from him at Real Madrid and here. He gets criticised when the team loses. He is a big target when they lose. But I admire him.

"Maybe his body language doesn't help him too much, but sometimes that confuses the opinion of the critics.

"I don't have doubts about his quality. It's good for the Premier League to have players of this talent, but hopefully on Sunday he can play a bad, bad, bad game."

We live in a world where facts and fiction get blurred
In times of uncertainty you need journalism you can trust. For only R75 per month, you have access to a world of in-depth analyses, investigative journalism, top opinions and a range of features. Journalism strengthens democracy. Invest in the future today.
Subscribe to News24
Related Links
Wenger vows Arsenal will attack Man City
Lukaku: I'm not finished article
Mourinho couldn't believe Chelsea sold Matic
Next on Sport24
Salah best in world says Liverpool boss Klopp: 'No one better than him'