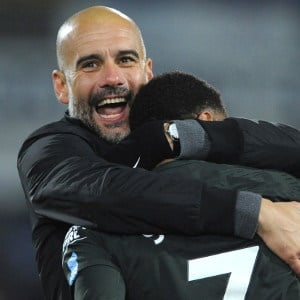 It had seemed as if what became City's 12th successive league victory would end in a draw after Oriol Romeu's 75th-minute equaliser for the Saints cancelled out a goal from Kevin De Bruyne early in the second half.

But the sixth minute of stoppage time saw Sterling curl a brilliant shot into the top right-hand corner, a goal that produced delirious scenes at the Etihad Stadium, with Guardiola running onto the middle of the pitch in joyful celebration.

"It was an astonishing end to the game," Guardiola told the BBC after a win that kept City eight points ahead of second-placed local rivals Manchester United.

"It means a lot. They (Southampton) had 10 guys in the box, it was so complicated to attack them.

"They had chances in the first half, all the teams are better than us at set-pieces. They are stronger than us but we kept patient.

"At the end our momentum kept going, Raheem scores a fantastic goal."

The Spaniard added: "What impresses the most is the heart with which they play. What happened in the locker room was amazing. You have to enjoy these situations, you never know what will happen in the future. We want to win the league but you have to celebrate when you score in the last breath like that."

After the final whistle, Guardiola was involved in an angry verbal exchange with Southampton's Nathan Redmond, which the City manager said was to do with what he saw as the visitors' time-wasting tactics.

"I was telling Nathan Redmond how good he is at the end. Southampton have some super talented players, Redmond is so good one against one. But they didn't want to play, they were time wasting from the ninth minute. I just wanted them to play."