Hazard says Chelsea know where his future will be 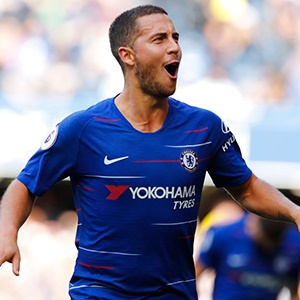 London - Eden Hazard has told Chelsea he has made his mind up over his future but has yet to publicly announce if he will stay at Stamford Bridge after persistent speculation linking him with a move to Real Madrid.

The Belgium forward has just a year left on his contract after joining the Premier League club from Lille for £32 million in 2012.

And after a substitute outing in Sunday's 0-0 draw at Leicester the Belgium international revealed he had made the club aware of his decision.

"Yes. A couple of weeks ago. Yes I have made my decision but it is not just about me," said Hazard, who blew kisses to the travelling fans, who called for him to stay.

"I have made my decision, that's it."

When asked if his future will become clear after the Europa League final against Arsenal on May 29 he added: "I think so. We have a final to play and then I will see."

The Blues are understood to be holding out for £100 million.

The 28-year-old also admitted he had wanted his future resolved earlier to avoid it being the season-long saga it has become.

"Yes, I wanted that but that's not happened. I'm still waiting like you are waiting and like the fans are waiting," he said.

"I am not thinking about this and this, my situation or the club's situation. I just try to win games."

Hazard played the final 21 minutes at the King Power Stadium as Chelsea finished third in the Premier League, 26 points behind champions Manchester City.

Chelsea manager Maurizio Sarri said earlier he was still in the dark over Hazard's future.

Hazard has talked about it being "a dream" to one day play for Real Madrid boss Zinedine Zidane but Sarri said he did not know if the playmaker was set to leave swap London for Madrid.

"I hope of course, like every fan of Chelsea, that he will remain with us," he said. "But at the moment I don't know."

"I know very well that Eden tried to do his best for seven seasons at Chelsea," the Blues boss added. "He did very well, he has become one of the best two or three players in the world, but I think also that we have to respect him and his decision."

Sarri also cast doubt over his own position and could not say for sure if he will be at Stamford Bridge for a second season.

"As you know very well, I love English football.

"I love the Premier League, the level is really the best in the world I think, the atmosphere in the stadiums is wonderful. I like very much to stay here."

Related Links
Micho: 'We had too many draws'
'I want Pitso to be the Alex Ferguson of Mamelodi Sundowns'
Man City will only get better, Guardiola warns
Share
Next on Sport24
Premier League's weekend gold medal goes to ... Michail Antonio!