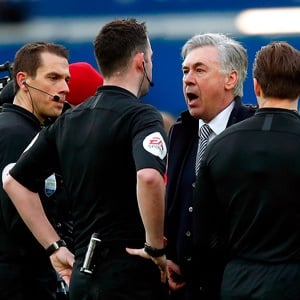 Cape Town - Carlo Ancelotti has denied disrespecting the referee after his Everton side were denied a last-gasp winner against Manchester United.

Sunday's Premier League encounter ended 1-1 at Goodison Park, where the match finished as crazily as it had begun.

The England goalkeeper made amends with a superb stop from substitute Odion Ighalo as full-time approached and De Gea pulled off a fine save of his own before Calvert-Lewin sent Goodison Park wild with what appeared to be a stoppage-time winner.

But a seated Gylfi Sigurdsson was ruled offside by video assistant referee Jon Moss when the shot deflected in off Harry Maguire, and incandescent Everton boss Ancelotti was given a red card upon the final whistle.

Calvert-Lewin was shown the contentious VAR decision moments before giving Sky Sports his post-match interview, with his immediate reaction being: "That is a disaster. Oh my gosh. He's not even obstructing the line of sight."

Ancelotti marched onto the field at full-time and was shown a red card by referee Chris Kavanagh for his remonstrations, although he had a more civil conversation with the official once the emotions had settled.

"Honestly, it was a difficult decision," the Italian said. "I think they check the position of Gylfi - that was offside.

"My opinion is a really difficult decision."

Asked if he had been sent off before as a manager, Ancelotti said with a laugh: "It is not the first time - and will not be the last!

"I never disrespected. It can happen.

"At the end of the game, I was a little bit nervous and maybe the referee also.

"We spoke friendly after the game. No problem.

"If I am banned, I will be disappointed but the stand of Stamford Bridge (where Everton play next weekend) is really close to the bench so I will be there."