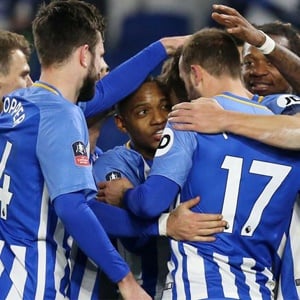 Cape Town - A brilliant second half performance guided Brighton to an impressive 3-1 win over West Ham United at the Amex Stadium in the Premier League on Saturday evening.

Brighton took the lead through Glenn Murray in just the eighth minute of the game but their lead only last 22 minutes before Javier Hernandez restored parity.

Izquierdo made it 2-1 in the 52nd minute with an absolute blinder of a goal before Pascal Gross secured the points for his side in the 75th minute.

The home side got off to a dream start and broke the deadlock just eight minutes into the game with Gross slipping a pass through for Murray, who neatly tucked the ball beyond Adrian to make it 1-0.

Anthony Knockaert was kicking himself around a quarter of an hour into the game after somehow blasting a chance to double his side's lead over the bar from just 10 yards out.

Believe it or not, it took a full 25 minutes for West Ham to register their first shot on target and Samuel Byram almost scored with his header, but it was bundled off the line by Shane Duffy.

The home side thought they should have had a penalty in the 27th minute when the ball struck Angelo Ogbonna's arm, but the referee disagreed.

Their frustration was compounded 10-fold three minutes later when Hernandez combined with both Mark Noble and Joao Mario to score a marvelously constructed equaliser.

Murray then volleyed a shot over the bar before Byram flashed high as the sides traded blows to end the first half.

The start to the second half was almost the complete opposite of the first, with both teams measured and cautious, and not willing to get caught on the counter.

It took a truly remarkable effort from Izquierdo in the 59th minute to break the monotony. A poorly cleared corner fell to his feet and he hit an incredible drive into the top corner.

From there it was all Brighton and it felt almost inevitable when Gross made it 3-1 in the 75th minute. Another poor clearance fell to the midfielder on the edge of the area and he smashed a fierce shot past a diving Adrian to secure three valuable points for his side.

We live in a world where facts and fiction get blurred
In times of uncertainty you need journalism you can trust. For only R75 per month, you have access to a world of in-depth analyses, investigative journalism, top opinions and a range of features. Journalism strengthens democracy. Invest in the future today.
Subscribe to News24
Related Links
Sanchez scores as United beat Huddersfield
Sanchez opens Man Utd account
Ea Lla Koto too strong for Bakgaga
Next on Sport24
WRAP | Premier League