Life's a pitch for Arteta after Burnley stalemate 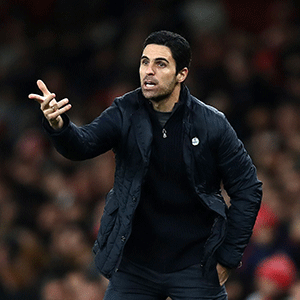 Burnley - Mikel Arteta blamed the Turf Moor pitch as Arsenal lost more ground in the race to finish in the Premier League's top four after being held to a 0-0 draw at Burnley on Sunday.

Arteta's side are trailing 10 points behind fourth placed Chelsea and look certain to fall well short of the Champions League places.

It was another frustrating afternoon for Arteta, who saw his team squander several chances to take the lead in a match they could easily have lost with better finishing from Burnley.

Arteta claimed the long grass and a dry pitch had played a crucial role in preventing Arsenal playing their normal passing game.

Indicating a couple of inches, Arteta insisted: "The conditions were difficult. The grass was this long and they didn't put any water on it, and that's not a very helpful thing to play football.

"I didn't water the pitch yesterday at the training ground because I expected it, but that doesn't make it any easier to play.

"They do what they do really well and you are allowed to do it so we have to react to that."

Arsenal are without a win in their last four league games, having drawn all four of them, and Arteta has won just once in seven league matches since replacing the sacked Unai Emery.

Arteta can point to only one defeat in that period and there is no doubt Arsenal are more competitive than they were under Emery.

Even so, they still look creaky at the back and lack a cutting edge up front, a concerning issue given the supposed wealth of attacking options in Arteta's squad.

Arsenal have now drawn five consecutive away league matches for the first time since August 1948 and actually sit closer to the relegation zone - seven points away - than the top four.

"I was very disappointed with the way we started the second half. For the first 20 minutes we couldn't control any aspect of the game, and we were lucky not to concede a goal," Arteta said.

"We need more consistency. We were fantastic in some moments but we were so sloppy and we put ourselves in big trouble with a lot of unnecessary situations."

New signings Cedric Soares and Pablo Mari were missing from the Arsenal squad due to fitness concerns.

But Pierre Emerick-Aubameyang returned after serving a suspension for his red card at Crystal Palace.

Mesut Ozil and Aubameyang combined to carve open the Burnley defence in the opening moments, but Alexandre Lacazette headed wide from the Gabon striker's cross.

Arteta had his players run into boxing bags at the club's training ground this week in an unusual attempt to prepare for the physical test posed by Burnley.

Arsenal were up for the challenge, moving the ball quickly and with purpose at times.

But Aubameyang should have done better than shoot harmlessly wide after getting behind Matt Lowton to reach David Luiz's long pass.

After a slow start, Burnley threatened when Jay Rodriguez tested Bernd Leno with a stinging drive before Dwight McNeil blasted just over.

Kept in the contest by their relentless work ethic, Burnley could have snatched the lead when Jeff Hendrick scooped wastefully over from McNeil's cross.

Arteta's defence were exposed in the air time and again as Burnley dominated after half-time.

They stood rooted to the spot when James Tarkowski headed a free-kick wide before Hendrick nodded past the post from McNeil's cross.

Aubameyang has seven goals in four games against Burnley, but he couldn't break the deadlock this time, diving to head wide from Lacazette's cross.

Rodriguez should have won it for Burnley when he met McNeil's cross with a close-range volley that hit the bar and bounced down on the line, with goalline technology confirming the whole ball did not go over.