Cape Town - The December-January period has historically been Liverpool's weakest point of the season, but the current campaign could be different, writes Tashreeq Vardien.

However, as soon as December hits, the Reds have tended to take their foot off the pedal during the festive period where matches come thick and fast.

I'm sure long-suffering Liverpool fans can attest to what I'm saying!

On too many occasions the Reds have dropped crucial points when the December and January fixtures come around.

However, the current 2019/20 season represents an excellent chance for Liverpool to end their 30-year Premier League title wait.

Jurgen Klopp's charges (40 points) are eight points ahead of second-placed Leicester City (32 points) while current champions Manchester City are lagging behind in third place, 11 points adrift of the leaders (29 points).

Below is a look at four campaigns throughout the years where Liverpool have seen their title chances fall short at winning a Premier League crown:

Under the tutelage of Gérard Houllier, the Frenchman had an exciting young team with Michael Owen and Emile Heskey leading the attack following Robbie Fowler's departure to Leeds United.

On the back of a Cup treble - League Cup, FA Cup and UEFA Cup - the season prior, Anfield legend Steven Gerrard made a name for himself in midfield as Liverpool challenged Arsenal and Manchester United.

In the months of December and January, Liverpool played 16 matches in all competitions with 13 of those being league games.

At the start of December 2001, Liverpool were ahead of Leeds United by three points with a game in hand.

As the graph below shows, Liverpool would only win six of those 13 Premier League matches and at the beginning of February found themselves in fourth place... 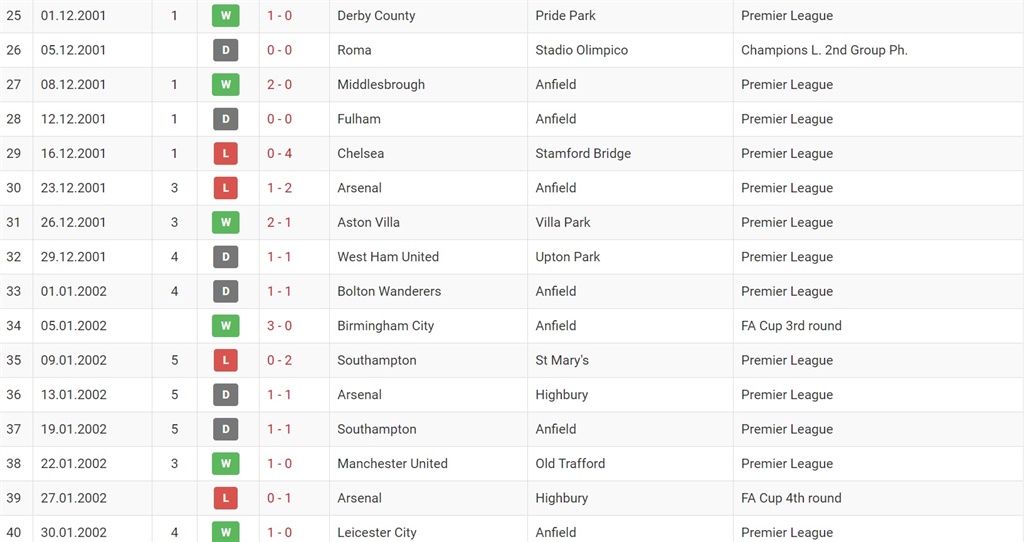 Adored by the Liverpool faithful after guiding the Reds to their fifth Champions League crown, coach Rafael Benitez was on a quest to deliver a Premier League title.

Gerrard and Fernando Torres' partnership continued to grow from the previous campaign and it looked as if Liverpool were in with a shout of league honours.

Liverpool secured a point on December 1 against West Ham which ensured they kept top spot - by a single point - ahead of Chelsea.

Man United were in first place with 53 points and the Red Devils continued to surge at the summit of the standings as they ended the campaign as champions.

Liverpool held first place at the beginning of December during this campaign.

Coach Brendan Rodgers was a relative novice in top flight football at the time, but the Northern Irishman fared well in guiding Liverpool to an exciting title chase.

But eventually it would be one they would want to forget.

Three crucial defeats against Hull City, Manchester City and Chelsea, and a home draw against Aston Villa, dropped Liverpool to fourth position at the start of February.

However, a resurgence from the Reds - and a dip in form from Manchester City - saw Liverpool take the title race to the final five matches of the season.

Liverpool beat City 3-2 at Anfield and then travelled to Norwich City and brushed aside the Canaries by the same scoreline.

But a visit from Jose Mourinho's Chelsea threw a spanner in the works for Liverpool.

A rare mistake from fan favourite Gerrard in slipping allowed Demba Ba to grab hold of the ball - and the rest is history.

Last season was one of Liverpool's better December-January periods as they won all their December matches, but suffered a key defeat to Manchester City at the Etihad Stadium and were held to a home draw by Leicester in January.

City would only drop points once following that Liverpool win - a 2-1 loss to Newcastle - before going on a record-breaking win streak to claim back-to-back titles.

A single point separated the two teams at the end of the campaign with City completing a first ever domestic treble.

For Liverpool, they had to "console" themselves with a sixth Champions League title.

On the bright side for Liverpool fans, their team does have a knack of upping its intensity towards the tail end of the season.

In each of the season's above, none of the coaches had another chance to get Liverpool into a similar title-challenging position ... until now.

Klopp has brought consistency to Anfield. Liverpool are currently unbeaten at their historic ground for 46 matches - winning 36 and drawing 10.

Klopp has turned the Reds into a formidable outfit and a team to be feared all over Europe, not just in the Premier League.

This season things have fallen perfectly into place for Liverpool as Klopp has managed to keep his side unbeaten - 13 wins, 1 draw - despite worrying injuries to first XI players such as Virgil van Dijk, Mohamed Salah, Roberto Firmino and Trent Alexander-Arnold.

It certainly appears so!

On Wednesday, their title quest continues as they start their December matches with a Merseyside derby against rivals Everton.

It will be the first of two matches the sides will play following Monday's FA Cup Round 3 draw.

Liverpool will again entertain the Toffees early in the new year in a third round clash.

Related Links
Messi wins Ballon d'Or for record 6th time
Man City must tighten up at the back, says Guardiola
Three things we learned from the Premier League
Share
Next on Sport24
Solskjaer asked England not to pick Greenwood before Covid-19 breach