Man United pulled out of Cavani deal due to financial demands Cape Town - Manchester United reportedly opted against bringing in Edinson Cavani from Paris Saint-Germain in January due to financial considerations.

United, though, decided to walk away from the table after crunching the numbers on the former Napoli star, with fears they were also being played off against Atletico Madrid.

It's understood PSG were demanding a transfer fee of £25 million despite the 32-year-old being out of contract this summer, something bosses in Manchester could not entertain.

Cavani was also asking for wages of £250,000-per-week, which meant over the course of a requested three-year deal United would have been committed to £61 million before agent fees and a hefty signing-on bonus were also factored in.

Instead, United raised plenty of eyebrows by recruiting Nigerian striker Odion Ighalo from Chinese Super League team Shanghai Shenhua on loan for the remainder of the campaign.

The Manchester giants agreed to pay his parent club a £2.75 million loan fee along with contributing £100,000-per-week towards his regular £300,000-per-week salary.

United's total outlay on the former Watford man will be less than £5 million - proving a financial no-brainer for them in comparison to the overall Cavani package.

The veteran South American will have his pick of clubs when he becomes a free agent but United had only ever identified the player as a short-term solution.

United were previously considered to be at the front of the queue to sign striker starlet Erling Haaland before the Norwegian rejected them last month in favour of joining Borussia Dortmund from Red Bull Salzburg.

Haaland has already banged in eight goals in four games for his new club although United will feel justified they did not panic by just stumping up on Cavani. 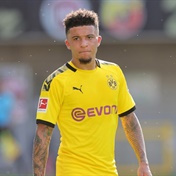