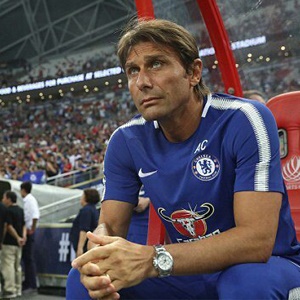 London - Fuelled by the personal intensity that inspired Chelsea's return to the top, Antonio Conte has vowed to stop the champions becoming the latest victims of the Premier League's sophomore slump.

A glance at recent Premier League history has provided all the motivation Conte requires as the Chelsea manager plots his team's title defence, which gets under way against Burnley on Saturday.

The last two English champions both sacked their manager in the midst of title hangovers the following season, with Jose Mourinho axed by Chelsea in 2015 and Claudio Ranieri ousted by Leicester City last term.

Warning his players not to rest on their laurels, Conte said: "We know the next season will be tough.

"Two coaches have been sacked from Chelsea and Leicester after winning the league and I want to avoid this.

"The players want to avoid the bad season they had with Mourinho. We are working very well and we hope to find the best solution."

Conte's concerns have been exacerbated by a close season that has been far from plain sailing, despite his family vacation to soak up the Sardinian sun on a plush yacht last month.

Since being drenched in champagne by his jubilant players at the climax of their title-winning campaign, Conte has become embroiled in disputes with his employers over a new contract and transfer issues.

He was also drawn into a damaging feud with Diego Costa after telling the Brazil-born Spain striker via a blunt text message that he was no longer in his plans.

Costa embarrassed Conte by making the message public, in the process making it much harder for Chelsea to demand a hefty fee for the forward, who remained exiled from the squad throughout pre-season.

As Conte's contract negotiations rumbled on and Inter Milan began to circle, reports emerged suggesting he might quit after just one season in frustration at Chelsea's failure to land his top transfer targets.

Aware Chelsea benefited from the extra recovery time afforded by their lack of European commitments last season, Conte wants to add depth to his squad for a twin assault on the league and Champions League.

Yet Manchester United stole a march on him to sign Everton striker Romelu Lukaku and while Manchester City have spent over £200m, Chelsea seemed to be dawdling.

Appeased by Chelsea's decision to allow him to hire two new Italian assistants, Conte finally signed an improved deal, which at around £9.6 million a year makes him the best-paid manager in the club's history.

Even so, it was notable his contract runs no further than the 2019 expiration of his original deal.

Chelsea made an inauspicious start to the season on Sunday as Courtois and Morata squandered spot-kicks to hand Arsenal victory on penalties in the Community Shield.

Conte struggled to conceal his frustrations after the game, hitting out at referee Bobby Madley for sending off Pedro and refusing to answer when asked if he was satisfied with his squad.

Faced with steering Chelsea through such choppy waters, perhaps it is not surprising Conte has cut a restless figure since returning from his Mediterranean cruise.

We live in a world where facts and fiction get blurred
In times of uncertainty you need journalism you can trust. For only R75 per month, you have access to a world of in-depth analyses, investigative journalism, top opinions and a range of features. Journalism strengthens democracy. Invest in the future today.
Subscribe to News24
Related Links
Klopp satisfied with defensive options
Everton 'close to Sigurdsson deal'
Silva wants Mbappe at Man City
Next on Sport24
Solskjaer laments Man United's 'missed opportunity' after Liverpool draw