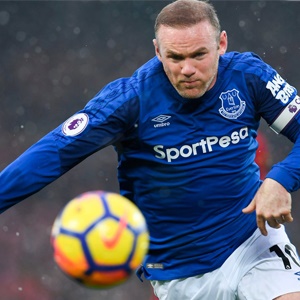 Cape Town - Everton forward Wayne Rooney believes, to nobody’s surprise, that they deserved the penalty awarded in Sunday’s 1-1 draw with Liverpool at Anfield.

The Toffees were trailing by a single goal from Mohamed Salah until Rooney’s searching ball forward picked out Dominic Calvert-Lewin, who went down under a push from Reds defender Dejan Lovren.

"It is a fantastic point for us," Rooney told Sky Sports.  "Liverpool are a fantastic team with good individual players.

"We knew it would be difficult and we would need to be patient. We defended brilliantly. We had two or three moments on the break that we had to take and we did that.

"It is great to play the derby. It is great for the city and there are bragging rights. The Evertonians will be more pleased.

"I had to keep myself composed. Lovren kicked the ball away and that gave me time. It is always nice to score against Liverpool, no matter who you play for.

"I knew where I was going. I practiced yesterday and thankfully I caught it right. It looked a clear penalty. He pushed him over and the ref has made the right decision."

Everton next travel to St. James' Park to face Newcastle United in an English Premiership clash on Wednesday evening.

We live in a world where facts and fiction get blurred
In times of uncertainty you need journalism you can trust. For only R75 per month, you have access to a world of in-depth analyses, investigative journalism, top opinions and a range of features. Journalism strengthens democracy. Invest in the future today.
Subscribe to News24
Related Links
United, City involved in violent post-match brawl
Chelsea face reality check as title hopes fade
City were lucky but title race is over - Mourinho
Next on Sport24
Ziyech says Chelsea move came at right time