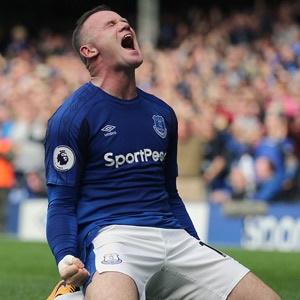 Veteran English manager Allardyce arrived at Goodison Park in the company of Everton owner Farhad Moshiri and the pair saw Rooney, in his second spell with his hometown club, score twice inside the opening half-hour.

But it was his 66th-minute effort that will be talked about for years to come.

From fully 60 yards out, Rooney struck the ball over the head of his former England team-mate Joe Hart after the Hammers goalkeeper had rushed out of his box to boot the ball into Everton's half.

Victory moved Everton up into 13th place in the table and go left them five points clear of the relegation zone.

Everton went ahead in the 18th minute after Hart brought down Dominic Calvert-Lewin to concede a penalty.

Hart saved Rooney's spot-kick only for the experienced forward to head home the rebound.

And 10 minutes later Everton were 2-0 up when Rooney, given his league debut by Moyes as a 16-year-old in 2002, shot home from 12 yards out following a cross from Tom Davies.

At 2-0 down the Hammers still had a chance to force their way back into the match, but Everton goalkeeper Jordan Pickford saved a penalty from Manuel Lanzini after Ashley Williams hacked down Diafra Sakho.

If this was indeed David Unsworth's last a match as Everton caretaker boss, it was a fine way for the club's former Under-23s manager to bow out.

Unsworth had been in temporary charge since Koeman was sacked on October 23 and he had made clear his desire to take on the job permanently.

But Wednesday's victory was just Everton's second in eight matches under Unsworth, during which time they've lost five and conceded 20 goals.

"Sam Allardyce will be at USM Finch Farm (Everton's training ground) this afternoon to finalise terms on becoming the new manager of Everton Football Club," it read.

The Daily Mail reported Allardyce had signed an 18-month deal and quoted Moshiri saying: "We need a strong leader. He gives us that."

Allardyce, 63, had ruled himself out of the running earlier this month, saying he did not feel Everton were convinced he was the right man.

This will be the 10th English club managerial position taken up by Allardyce, who established his reputation at Bolton Wanderers and guided Crystal Palace to safety last season.

When he left Selhurst Park in May, Allardyce said he didn't want another management job, but the chance to turn around Everton's fortunes appears to have lured him back.

Allardyce has previously led Palace and Sunderland to safety from precarious situations.

His achievements at the Stadium of Light earned him his dream job with England, but that turned sour after only one match, with Allardyce stepping down in September 2016 following a newspaper sting.

.@WayneRooney will always be my favorite. This goal for the hat trick is just ?? #Wazza pic.twitter.com/Sh8l77t9dS