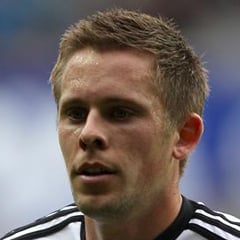 Swansea - A goal from Icelandic star Gylfi Sigurdsson secured Swansea a crucial 2-1 win over Southampton on Tuesday the first time they have won two successive Premier League games this term.

The win sees Swansea - whose performances and fortunes have been transformed since Paul Clement was appointed earlier this month - remain outside the bottom three level on points with Middlesbrough and ailing champions Leicester and two points clear of third from bottom Crystal Palace.

Southampton - decimated by injuries to eight players including outstanding centreback Virgil van Dijk - are not out of trouble as they hover nine points above the drop zone.

Swansea weathered some early Southampton pressure and felt they might have had a penalty when the ball struck Saints defender Jack Stephens on the hand but nothing was given.

However, playing with new found confidence under Clement, first Leroy Fer forced Fraser Forster into a fine save and from Sigurdsson's resulting corner Mawson headed home.

Swansea looked comfortable in the lead but they were pegged back approaching the hour mark as Ryan Bertrand burst down the left flank and his cross was tucked away by Long, whose goal last week propelled Saints into the League Cup final at Liverpool's expense.

Clement thought that the moment to bring on January signing Dutch international winger Luciano Narsingh, who had been unable to play prior to Tuesday because he arrived with a calf injury from PSV Eindhoven.

The 26-year-old - signed for 4 million ($4.9 million, €4.6 million) - made an instant impact with a dazzling run, after Swansea cleared a Saints corner, and looking up he saw Sigurdsson hurtling into the box - he produced the ideal cross and the Icelandic star volleyed it home.