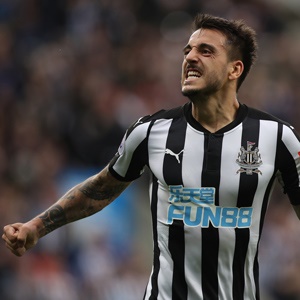 Cape Town - Newcastle came from a goal down to earn a 1-1 draw with basement Swansea in their Premier League clash at St James' Park on Saturday.

With the Toon coming into the home fixture in 13th place but holding a winless run stretching to six games at St James Park, Carlos Carvalhal's side arrived with a real sense of optimism they could achieve a result.

Christian Atsu was the liveliest player on the pitch in an otherwise dull first half, but the Ghana winger was guilty of not converting the half-chances that fell to him before the half-hour mark.

There was drama before half-time, though, as Mohamed Diame looked to have prevented the ball from crossing the goalline with his arm and Dwight Gayle thought he opened the scoring at the other end shortly after.

However, it was ruled offside, much to the dismay of the home supporters.

Gayle came close again five minutes into the second half, but his fizzing effort from 25 yards out flew just wide of the post.

A dull and uninspired fixture eventually found an opening goal on the hour mark with Jordan Ayew following up a rebound from his own headed effort.

The point was not enough to lift the Swans off the foot of the table, while the Magpies dropped to 15th due to other results

We live in a world where facts and fiction get blurred
In times of uncertainty you need journalism you can trust. For only R75 per month, you have access to a world of in-depth analyses, investigative journalism, top opinions and a range of features. Journalism strengthens democracy. Invest in the future today.
Subscribe to News24
Related Links
Doucoure steals late point for Hornets
WRAP: English Premiership
Pardew picks up first win for Baggies
Next on Sport24
Kane says Premier League players should keep taking the knee in racism fight