Clucas agreed a four-year contract with the Premier League club and is expected to step into the role played by Gylfi Sigurdsson before the Iceland international moved to Everton last week.

Clucas shone for Hull last season despite their relegation from the top-flight and appeared three times in the Championship this season before missing last weekend's match against QPR as speculation mounted about his future.

After being released by Leicester as youngster, Clucas revived his career with a spell at the Glenn Hoddle Academy.

He played for Mansfield and Chesterfield before joining Hull in 2015.

We live in a world where facts and fiction get blurred
In times of uncertainty you need journalism you can trust. For only R75 per month, you have access to a world of in-depth analyses, investigative journalism, top opinions and a range of features. Journalism strengthens democracy. Invest in the future today.
Subscribe to News24
Related Links
Henderson: Liverpool's job is not done yet
Khune hospitalised with chest infection
German prospect Sabiri signs for Huddersfield
Next on Sport24
Coady dismisses Wolves exit to re-join Liverpool: 'I love playing for this football club' 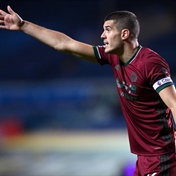