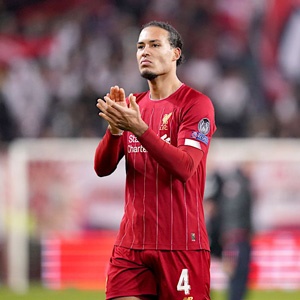 Virgil Van Dijk fears Liverpool will be forced to celebrate their first English title for 30 years in an empty stadium as a result of coronavirus chaos.

All Premier League games have been postponed until at least April 3 due to the spread of the global pandemic.

Premier League chiefs are set to meet on Thursday to discuss if it will be possible to continue the season and, if so, in what format.

Games could be played behind closed doors, which would mean Liverpool, who are 25 points clear of second placed Manchester City, winning the title without their fans being present.

That is a depressing prospect for Liverpool defender Van Dijk.

"If we won it in an empty stadium and the fans weren't there, I'd be gutted for them," he told several British newspapers on Sunday.

"Obviously, if there are no fans at Anfield, then it will be a bit of a blow. No one wants to play games without the fans.

"Until a decision is made on how we go on from here, then we just have to deal with it. But when it happens, we are still bringing the title to our fans, definitely."

Liverpool could have wrapped up the title on Monday with a win at Everton if Manchester City were beaten by Burnley on Saturday, but both those games were postponed, along with the rest of the Premier League programme.

Some have suggested the season should be scrapped for safety reason, which would leave Premier League chiefs to decide if Liverpool should be given the title even though the campaign did not reach its scheduled 38-game conclusion.

Sport is expected to be subjected to further restrictions next week, with British Prime Minister Boris Johnson reportedly ready to announce a ban on major public gatherings.

The sporting programme has once again been decimated on Sunday, although the Super League match between Castleford and St Helens, the All England badminton Championship and Olympic boxing qualifiers are still going ahead in Britain.