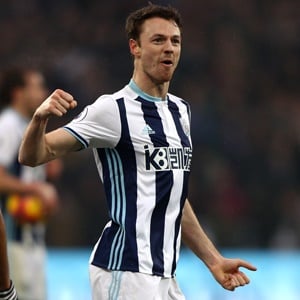 Johnny Evans (Getty Images)
Cape Town - West Bromwich Albion cannot afford to take their foot off the pedal in the Premier League as they push for a possible European spot, defender Johnny Evans has said.

West Brom have consolidated their eighth place in the league with a four-game unbeaten run and, with 13 matches left to play, hope to ambush Everton in seventh for a possible Europa League place.

"Everton are still four points ahead of us, we want to catch Everton, that's the next aim, you're always looking above you. West Ham are trying to catch us," Evans told British media.

"We haven't talked about specific targets. I know the manager will say we get to 40 points and work from there, exactly like Leicester City did last season.

"Of course I'm not saying we're going to win the league but we've put ourselves in such a good position we don't want the season to just fizzle out and fade. We want to capitalise on this position and make it a season to remember."

Evans was confident West Brom would eclipse their best Premier League points haul of 49, which they achieved during the 2012-13 campaign under former manager Steve Clark.

"I think the way we've been playing at the minute with the mentality we've got, there's no reason why we can't," he added.

West Brom host 14th placed Bournemouth in their next match on February 25.

Related Links
CL progress near impossible - Neymar
Angel reborn in CL thrashing of Barca
Morgan: We need to force our luck
Share
Next on Sport24
Liverpool v Arsenal | 3 key battles to look out for