Paris - If Manchester United fans have been put to sleep by several dull seasons of late they are about to be awoken by the arrival of the strutting Swedish superstar Zlatan Ibrahimovic.

The giant striker with an ego as great as his astonishing talent said Thursday that he would be joining coach Jose Mourinho's bid to take United back to the top of English football.

A player who stands 6ft 4ins tall (1.95m) and has a black belt in taekwondo, he has scored some of the most eye-catching international goals, from his back-heel against Italy at Euro 2004 to his breathtaking overhead kick from 35 yards against England in 2012.

Born in a difficult neighbourhood of Malmo to a Bosnian father and Croatian mother, Ibrahimovic has never forgotten where he came from while enjoying a glittering career.

On his international retirement last week after a disappointing Euros, where he had promised: "The legend can still deliver," he once again evoked his tough background.

"It's a nice story because where I came from, what people call the ghetto, and I made that country (Sweden) my country."

Swedish fans will remember his 62 goals in 116 international matches.

But he is a consistent goalscorer at club level too, a leader on the pitch and in the dressing room and recently won his 11th league title, a fourth straight French championship with PSG following two titles at Ajax, three at Inter Milan, one at Barcelona and one at AC Milan.

There were also two with Juventus that were revoked because of a match-fixing scandal.

Nobody in Manchester should expect any modesty from Ibrahimovic.

On signing off from Paris Saint-Germain with a Cup win he was visibly pleased with himself: "It's mission accomplished. I didn't learn to speak French but I've won everything. I came, I saw, I conquered."

He was less euphoric after quitting Barcelona, where he failed to fill the boots of departing Cameroon striker Samuel Eto'o.

Ibrahimovic blamed coach Pep Guardiola, who he told to "go to hell" after his disappointing stint at the Camp Nou.

"When you buy me, you are buying a Ferrari," he said. "If you drive a Ferrari you put premium fuel in the tank, you drive onto the motorway and you floor the accelerator.

"Guardiola filled up with diesel and went for a spin in the countryside. If that's what he wanted, he should have bought himself a Fiat from the start."

He famously said the 2014 finals in Brazil would "not be worth watching" after Sweden lost to Portugal in a two-legged play-off.

"One thing is for sure, a World Cup without me is nothing to watch," he said at the time.

One thing is for sure, there will be plenty to watch in Manchester with Ibrahimovic and Mourinho now in the red half of town -- and Guardiola over at "noisy neighbours" Manchester City. 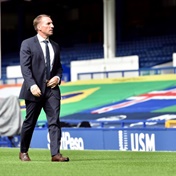