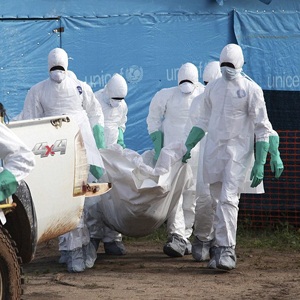 Cape Town -,Guinea and Sierra Leone have been ordered to move their African Nations Cup qualifiers next month to neutral territory following the outbreak of the Ebola virus in west Africa, which has killed more than 1 000 people.

The Confederation of African Football (CAF) said on Tuesday that Liberia, who are out of the Nations Cup, must also move international matches although there are none imminent at senior, club or junior level.

Sierra Leone had already asked Ghana to host their game against the Democratic Republic of Congo next month but have received an uncertain response.

The Ebola epidemic - the world's largest and deadliest so far - has killed 1 013 in Guinea, Liberia, Sierra Leone and Nigeria.

The World Health Organization has declared an international health emergency as it predicts the epidemic will continue for months.

"CAF has asked the three federations to relocate to a neutral country matches their teams are hosting in CAF competitions for a period up to mid-September," said a statement from African soccer's governing body.

Guinea were due to host Togo on 5 Sepember in their opening Group E qualifier while Sierra Leone's first home game is on 10 September against DR Congo in Group D.

Sierra Leone, where the FA suspended all football last week, had already made plans to move their tie, asking Ghana to host the match.

"While the GFA is keen on helping out our brothers from Sierra Leone, we are uncertain about the health implications for our country.

"Therefore the GFA has asked the SLFA (Sierra Leone FA) to ask their government to make a formal request to the government of Ghana for consideration by the Ministry of Health.

"It is based on this report from Ghana's Ministry of Health that a decision will be taken."

Earlier this month, Sierra Leone had a walkover in their playoff tie when the Seychelles refused the squad entry into the country because of fears of spreading the virus.

The Seychelles forfeited the tie, enabling Sierra Leone to qualify for the group stage of the preliminaries ahead of next January's finals in Morocco.

Togo had already said its government was likely to stop its squad from travelling to Guinea.

We live in a world where facts and fiction get blurred
In times of uncertainty you need journalism you can trust. For only R75 per month, you have access to a world of in-depth analyses, investigative journalism, top opinions and a range of features. Journalism strengthens democracy. Invest in the future today.
Subscribe to News24
Related Links
Ebola outbreak halts league
Seychelles forfeit AFCON tie
Ebola fears at Games
Next on Sport24
'Vagabondo' Ibrahimovic hitches ride on motorbike to sing at Sanremo