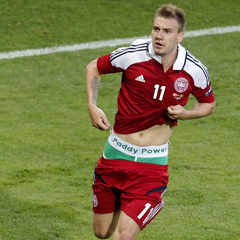 Yerevan - Denmark's chances of direct qualification to Euro 2016 suffered a serious blow as they played out a drab scoreless draw with bottom side Armenia in their penultimate qualifier.

The result puts them level with Group I leaders Portugal on 12 points and one ahead of Albania, who host the Portuguese later on Monday before taking on Serbia and Armenia in their final two qualifiers.

Denmark's remaining game is away to Portugal and their hopes of qualifying for next year's tournament in France are likely to rest on a playoff.

Despite the Danes being the better side for much of the game, Armenia spurned a great chance midway through the second half when Ruslan played in Yura Movsisyan but he fired his shot wide.

Nicklas Bendtner nearly punished the Armenians for that mistake minutes later, but he saw his rasping shot parried away.

Denmark, the 1992 European champions, struggled to create many clear chances though and Armenia almost took all three points at the death when substitute Artem Simonyan dragged his shot wide with three minutes to go.