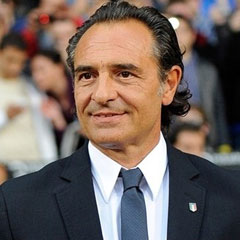 Coach Cesare Prandelli also selected Giorgio Chiellini, a move which is likely to stir up more controversy as the announcement came one day after the key defender was banned for three club matches for elbowing an opponent.

Rossi, sidelined for nearly two years with an anterior cruciate ligament injury to his right knee, made an impressive comeback this season until suffering another, lesser injury to the same knee in January.

He has only just made his latest return, scoring in a Serie A match against Sassuolo a week ago and setting up a goal against Livorno on Sunday.

When fit, the Fiorentina striker is regarded as one of Italy's best and a useful alternative to the mercurial Mario Balotelli to lead the attack.

Parma striker Cassano, whose career has been littered with tantrums and rows, has not played for Italy since leading the attack at Euro 2012 alongside Balotelli, but forced himself back into contention with 12 goals and some impressive performances this season.

Cassano said recently that he had lost 10 kilos in a bid to make the trip to Brazil.

Gilardino, who played in the 2006 and 2010 World Cups, has scored 15 goals for Genoa this season but it was not enough to swing Prandelli.

Toni, 37 this month, had pushed himself into contention with 20 goals for Verona but missed out, as did AS Roma's Francesco Totti, another 37-year-old.

Midfielder Emanuele Giaccherini, a regular in the Confederations Cup last year, was another who failed to make the list.

Prandelli has implemented a strict code of ethics since taking in over in 2010 and dropped players in the past for violent conduct in club games.

In April, he warned that any further misbehaviour could cost players their place at the World Cup.

However, he included Chiellini on Tuesday despite the Juventus player's three-match ban for elbowing Roma's Miralem Pjanic on Sunday.

Prandelli told ANSA that he had reviewed footage of the incident and said it was not violent, but his decision is likely to provoke criticism in a country where controversy is never far away from the national side.

We live in a world where facts and fiction get blurred
In times of uncertainty you need journalism you can trust. For only R75 per month, you have access to a world of in-depth analyses, investigative journalism, top opinions and a range of features. Journalism strengthens democracy. Invest in the future today.
Subscribe to News24
Related Links
No Nasri in France SWC squad
Vidal in Chile SWC squad
Dutch go 'old school' for SWC
Next on Sport24
Late Christian Eriksen winner sends Inter into Italian Cup semis as Ibrahimovic sees red