Nicola Rizzoli told the Gazzetta dello Sport, "Shortly after the blow, Kramer came to me asking 'Ref, is this the final?' I thought he was joking and made him repeat the question and then he said, 'I need to know if this is really the final.' When I said, 'Yes,' he concluded, 'Thanks, it was important to know that.'"

Rizzoli says he told Germany's Bastian Schweinsteiger about the exchange but Kramer continued playing for 14 minutes following a collision with Argentina's Ezequiel Garay.

He was eventually replaced in the 31st minute after slumping to the ground with a suspected concussion.

We live in a world where facts and fiction get blurred
In times of uncertainty you need journalism you can trust. For only R75 per month, you have access to a world of in-depth analyses, investigative journalism, top opinions and a range of features. Journalism strengthens democracy. Invest in the future today.
Subscribe to News24
Related Links
SWC winner Kroos joins Real
Pope gets signed SWC jersey
Messi award surprises Sepp
Next on Sport24
Barcelona and Napoli lead tributes to former star Maradona 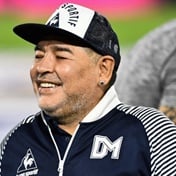