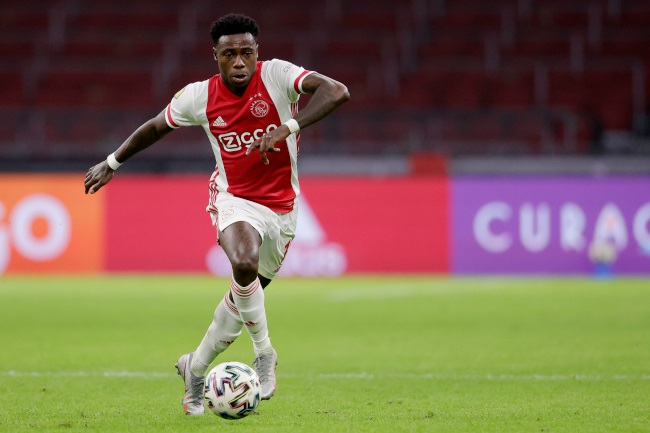 Dutch international footballer Quincy Promes has been arrested in connection with a stabbing at a family gathering earlier this year, a Dutch news report said Sunday.

The incident happened at a family party at a shed in the scenic town of Abcoude, just outside Amsterdam in late July, the newspaper said.

"A relative was seriously injured and suffered, among other things, very serious knee injuries," in the incident, the newspaper said.

Promes allegedly got into a scuffle after an argument with the relative and other family members immediately intervened, the paper said.

The relative laid charges a month ago, it added.

Amsterdam police spokesman Jelmer Geerds told AFP a "28-year-old man has been arrested" but declined to give further details.

He said the suspect was in custody and a decision whether he would be released on bail would be taken later on Sunday.

Ajax could not immediately be reached for comment, but the NOS public broadcaster said the club confirmed that Promes was not at training on Sunday.

The Amsterdam-born Promes, known for his speed and technical style of playing, joined Ajax last year from Sevilla FC in a 15 million-euro transfer.

Before that he played for Spartak in Moscow, where he was named Footballer of the Year in Russia in 2017.

He played his first match in Dutch national colours in March 2014 against France.

We live in a world where facts and fiction get blurred
In times of uncertainty you need journalism you can trust. For only R75 per month, you have access to a world of in-depth analyses, investigative journalism, top opinions and a range of features. Journalism strengthens democracy. Invest in the future today.
Subscribe to News24
Related Links
Bafana coach devastated by death of 'humble, ever-smiling' Madisha
Twitter reacts to death of Sundowns' star Motjeka Madisha
John Maduka on MTN8 final loss: 'The boys gave their best'
Next on Sport24
Messi scores twice as Barcelona dispatch Elche