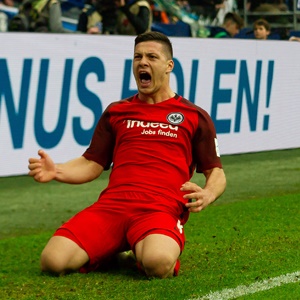 Madrid - Real Madrid said Tuesday they have signed 21-year-old Serbia striker Luka Jovic from German side Eintracht Frankfurt on a six-year deal for an undisclosed fee.

"Real Madrid and Eintracht Frankfurt have agreed the transfer of Luka Jovic, subject to a medical," Real said in a statement.

Jovic scored 27 goals in all competitions this season, helping Frankfurt to the Europa League semi-finals and seventh place in the Bundesliga. He also made four appearances for Serbia, scoring one goal.

His dazzling form put him on the radar of Europe's top clubs, with Spanish media quoting a price tag of 60 million euros ($67 million) while German media said Real will have paid out 70 million euros.

Frankfurt's sporting director Fredi Bobic disclosed no financial details but suggested the size of the Madrid offer was just too big to resist.

"In sporting terms, Luka Jovic is a big loss for us," he said in a statement.

"It was clear that we would not be able to turn down offers of a certain size."

He said the deal was good for the German club who originally signed Jovic on a two-year loan from Portuguese club Benfica and took up an option for a permanent move in April after Barcelona showed interest in the young star.

"He has the best perspectives for a brilliant career. We are proud to have helped him on his way," Bobic said.

In the statement, Real highlighted his power, technical ability and prowess as a marksman.

The Serb who began his career at Red Star Belgrade finished second top scorer in the Europa League, scoring 10 goals, one less than Chelsea striker Olivier Giroud. The Bundesliga club were beaten by Chelsea in the semi-finals.

In the Bundesliga, Jovic was on target with 17 goals, third in the league rankings along with Kai Havertz of Leverkusen and Marco Reus of Dortmund.

Jovic's signature comes ahead of the much-anticipated move to the Santiago Bernabeu of Chelsea star Eden Hazard, who has long been linked to Real and who indicated after the Europa League final victory over Arsenal that he had played his last game for the Londoners.

After years of relative inaction on the transfer market, club President Florentino Perez appears to be keen to put a new gloss on the club's tarnished reputation after a poor season in which they were overshadowed by rivals Barcelona.

His first big move came in March when he persuaded Zinedine Zidane to return as coach after he quit at the end of the 2017-18 season after bringing three Champions League titles in a row to the club.

We live in a world where facts and fiction get blurred
In times of uncertainty you need journalism you can trust. For 14 free days, you can have access to a world of in-depth analyses, investigative journalism, top opinions and a range of features. Journalism strengthens democracy. Invest in the future today. Thereafter you will be billed R75 per month. You can cancel anytime and if you cancel within 14 days you won't be billed.
Subscribe to News24
Related Links
Pirates set to add Bloem Celtic star to their ranks
Gordinho latest player set to leave Kaizer Chiefs
Angry Mpengesi says Chippa not for sale
Next on Sport24
EPL TV | The latest videos from the English Premier League

Get the newsletter
Voting Booth
Would you be keen to see the Springboks join the Six Nations?
Please select an option Oops! Something went wrong, please try again later.
Yes! The Northern Hemisphere is the future.
52% - 2475 votes
No! The Rugby Championship is still the pinnacle.
48% - 2261 votes
Previous Results
Showmax
The story of a legend: Sir Alex Ferguson