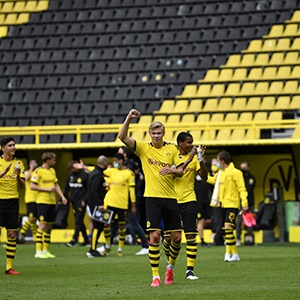 The coronavirus crisis could "potentially threaten" the existence of the German Football Association (DFB), its treasurer Stephan Osnabruegge warned Monday.

"The DFB is in the deepest economic crisis of the recent past," said Osnabruegge at the German FA's virtual extraordinary meeting.

He said "far-reaching cuts" must be made to avoid a worst-case scenario, which would see the DFB receiving €96.5 million ($105.1 million) less than planned this year, resulting in a forecasted loss of €77 million.

All but €13.8 million of that figure would be covered by the governing body's financial reserves.

However, the DFB would then be expected to avoid bankruptcy due to the equity capital it has available.

The German FA is eager to avoid laying off jobs, but some staff have been put on reduced hours since 1 May.

Planned wage increases have been suspended and the German FA's management has agreed to reduced salaries of between 10 and 30 percent.

It is the biggest sports body in Germany.

While professional football was allowed to resume in the Bundesliga 10 days ago, the lower leagues were halted in early March due to the virus outbreak.