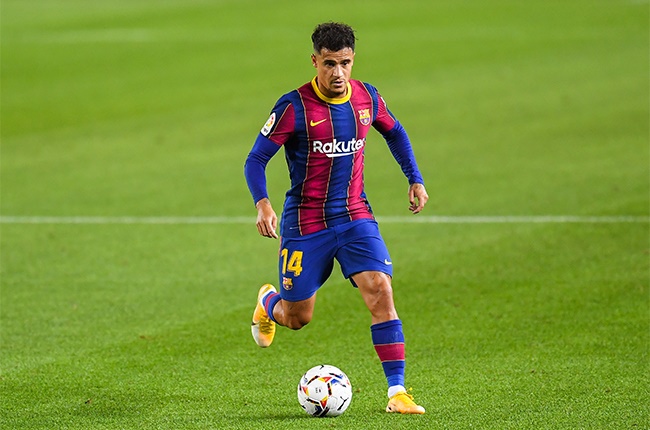 Philippe Coutinho of FC Barcelona runs with the ball during the La Liga Santander match between FC Barcelona and Sevilla FC at Camp Nou on October 04, 2020 in Barcelona, Spain. Football Stadiums around Europe remain empty due to the Coronavirus Pandemic as Government social distancing laws prohibit fans inside venues resulting in fixtures being played behind closed doors.
David Ramos

Barcelona midfielder Philippe Coutinho needs surgery to mend a torn meniscus after the Brazilian limped off the pitch late in Tuesday's drab home draw with Eibar.

His loss adds to a long list of injuries including Lionel Messi with the club sixth in La Liga seven points off leaders Atletico Madrid.

"It's the meniscus in his left knee and it needs surgery, which will be carried out in the coming days," a Barcelona statement said.

Coutinho was recruited from Liverpool in 2018.

But Coutinho failed to replicate the success he enjoyed on Merseyside in Barcelona, where his talent has withered in Messi's shadow. He was loaned out to Bayern Munich last season but the Germans opted against signing him permanently.

We live in a world where facts and fiction get blurred
In times of uncertainty you need journalism you can trust. For only R75 per month, you have access to a world of in-depth analyses, investigative journalism, top opinions and a range of features. Journalism strengthens democracy. Invest in the future today.
Subscribe to News24
Related Links
Sergio Reguilon not on speaking terms with Zinedine Zidane
Bradley Grobler unfazed by Orlando Pirates rumours, says Kaitano Tembo
Ole Gunnar Solskjaer plays down talk of a Manchester United title challenge
Next on Sport24
'Vagabondo' Ibrahimovic hitches ride on motorbike to sing at Sanremo