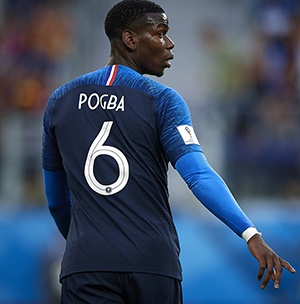 Paris - Didier Deschamps on Tuesday called up an uncapped trio of players including Barcelona centre-back Clement Lenglet for a 24-man squad for the world champions' friendly against Bolivia on June 2, and Euro 2020 Group H matches against Turkey on June 8 and Andorra three days later.

Accompanying Lenglet in their bid for a first cap will be Lyon right-back Leo Dubois and Lille goalkeeper Mike Maignan.

One noticeable absentee, however, is Marseille 'keeper Steve Mandanda, as Deschamps took the unusual step of naming four shotstoppers as captain Hugo Lloris turns out for Tottenham in the Champions League final against Liverpool on June 1.

"It's a choice of the moment," Deschamps said of Mandanda's absence.

"Steve has had a little bit of a complicated season with his club, he's had some injuries and performances below what he's capable of," he said, with PSG's Alphonse Areola in line to start against Bolivia.

Deschamps said the France team was evolving, although there were fewer changes to previous squads.

Personnel choices, he added in reference to Lenglet making the cut over Manchester City's Aymeric Laporte, "are sometimes tough".

"I have choices to make with what I see, what I know with the backroom staff as well.

"Clement is totally composed, he's very good technically," Deschamps said, hailing the player's sense of anticipation over his willingness to battle for the ball.

"He's clean, he's a Barcelona player. If he's there and he plays, it's because he obviously has many qualities."

We live in a world where facts and fiction get blurred
In times of uncertainty you need journalism you can trust. For only R75 per month, you have access to a world of in-depth analyses, investigative journalism, top opinions and a range of features. Journalism strengthens democracy. Invest in the future today.
Subscribe to News24
Related Links
Spurs ban fans for trying to sell Champions League final tickets
SuperSport's Mokoena set for French trial
Chelsea line up Lampard as potential Sarri replacement
Next on Sport24
Spurs held in first game in Europa Conference League, Roma run riot