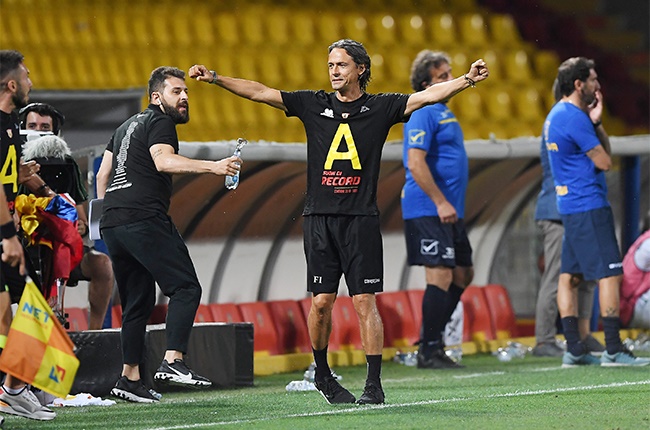 Filippo Inzaghi Benevento Calcio coach celebrates the promotion in Serie A at the final wistle of the serie B match between Benevento Calcio and SS Juve Stabia at Stadio Ciro Vigorito on June 29, 2020 in Benevento, Italy.
Francesco Pecoraro

Benevento, coached by former AC Milan and Juventus striker Filippo Inzaghi, secured promotion to Serie A on Monday for just the second time in their history with seven games to spare.

Inzaghi's men have only lost once in Serie B all season.

Benevento previously played in the top flight in the 2017-18 campaign, when they infamously set the record for most consecutive defeats to start a season in one of Europe's top five leagues, suffering 14 straight losses.

It was a run that was snapped when goalkeeper Alberto Brignoli's injury-time header grabbed a dramatic draw with Milan.

Benevento were still relegated that term, but will now get a second crack at Serie A under World Cup winner Inzaghi.

We live in a world where facts and fiction get blurred
In times of uncertainty you need journalism you can trust. For 14 free days, you can have access to a world of in-depth analyses, investigative journalism, top opinions and a range of features. Journalism strengthens democracy. Invest in the future today. Thereafter you will be billed R75 per month. You can cancel anytime and if you cancel within 14 days you won't be billed.
Subscribe to News24
Related Links
OPINION | Keeping Covid-19 results secret will undermine integrity of PSL
Gaston Sirino: I've grown a lot at Mamelodi Sundowns
Valencia sack coach Celades after Villarreal loss
Next on Sport
Everton announce appointment of Sean Dyche as new manager