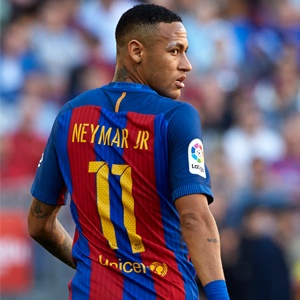 Washington - Neymar, serene amid a frenzy of transfer speculation, scored the first-half goal that gave Barcelona a 1-0 victory over Manchester United on Wednesday in an International Champions Cup friendly.

The Brazilian striker, reportedly pondering a €222 million move to Paris Saint-Germain, showed why the French club would be willing to pay a world-record price to get him.

He delivered his third goal in two matches in the exhibition tournament as Barcelona handed the English Premiership club their first defeat of the pre-season.

Neymar broke through in the 31st, stripping the ball from Antonio Valencia in the penalty area, turning and finding the net.
The goal proved enough to give a second straight victory to new Barcelona coach Ernesto Valverde.

There were eight changes to the Manchester United team that defeated Real Madrid on penalties on Sunday, with captain Michael Carrick, Marcus Rashford and Jesse Lingard the only players to retain their starting spots.

It was Manchester United who threatened first, when Rashford's cross found Romelu Lukaku in the area, but the Belgian couldn't find the net.

A long-range effort from Lukaku, a fierce blast from Paul Pogba and a curling effort from Rashford all tested Barcelona keeper Jasper Cillessen in the space of minutes.

But from there Barcelona dominated. De Gea denied Neymar from close range in the 28th, but had no answer for the Brazilian three minutes later.

Valencia had got control of a pass from Messi, but Neymar was there to regain the ball, turning in close quarters and firing past de Gea to the delight of the Barcelona fans among the 82 000-strong crowd at FedExField - home of the NFL's Washington Redskins.
Three minutes before the break de Gea parried Suarez's scissor-kick to keep it 1-0 to Barcelona at halftime.

Both coaches rang the changes at halftime, with Valverde replacing 10 players - only leaving Cillessen in goal.

Jose Mourinho made five changes in his Manchester United side, and the second half moved at a slower, less fluent pace.
Anthony Martial, Andreas Pereira and Pogba all threatened, but Manchester United were unable to find an equalizer.

The match was the last of Manchester United's US tour - which included wins over Real Madrid, Manchester City and Major League Soccer's Real Salt Lake and Los Angeles Galaxy.

They are due to take on Valerenga in Oslo on Sunday and then Sampdoria in Ireland before facing Real Madrid in the UEFA Super Cup on August 8.

Barcelona, meanwhile will take on Spanish rivals Real Madrid in a pre-season "Clasico" in Miami on Saturday - apparently still uncertain just how long they will have Neymar to rely on.