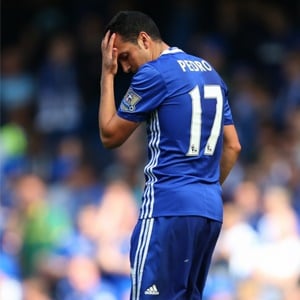 Frankfurt - A first-half strike from Pedro gave Chelsea a slender advantage in their Europa League semi-final tie as they were held to a 1-1 draw with Eintracht Frankfurt on Thursday.

Pedro's equaliser gave Chelsea a potentially crucial away goal after a hard-fought semi-final clash in a spine-tingling atmosphere at the Commerzbank Arena.

Fired on by the home crowd, fearless underdogs Frankfurt surprised Chelsea in the first half before being outclassed for long periods after the break.

Yet Adi Huetter's side battled through a tough second half to hold on to a draw and leave the tie finely poised ahead of next Thursday's second leg in London.

Chelsea coach Maurizio Sarri raised eyebrows with his decision to leave Eden Hazard out of the starting line-up, and his team struggled to deal with a ferocious Frankfurt in the first half.

Filip Kostic found the breakthrough on 23 minutes, sending a pinpoint low cross to Luka Jovic, who ducked low to flick his header inside the far post.

Frankfurt then tried to grab control of the tie, with Sebastian Rode snapping at Chelsea's heels in midfield and Jovic and Mijat Gacinovic lurking in wait for a chance to break.

Yet Sarri's side eased their way patiently back into the game, and deserved to draw level when Pedro finally found the net with a well-placed strike just before half-time.

It remained a fiercely contested game after the break, and Chelsea midfielder Jorginho had to be bandaged up after a clash of heads with Rode.

Always a step ahead of Frankfurt in the second half, the visitors nearly took the lead when David Luiz struck the bar with a fizzing free-kick.

Frankfurt had a penalty appeal waved away 12 minutes from time, and both David Abraham and substitute Goncalo Paciencia came close to snatching a late winner.

The Bundesliga club will travel to Stamford Bridge for the return leg on Thursday, May 9.

We live in a world where facts and fiction get blurred
In times of uncertainty you need journalism you can trust. For only R75 per month, you have access to a world of in-depth analyses, investigative journalism, top opinions and a range of features. Journalism strengthens democracy. Invest in the future today.
Subscribe to News24
Related Links
Strike duo fire Gunners towards Europa League final
AEK Athens fans suggest Greek Cup final be played - in Venezuela!
Spurs adamant Vertonghen not concussed
Next on Sport24
Prosecutors suspect Juventus helped Luis Suarez in Italian exam