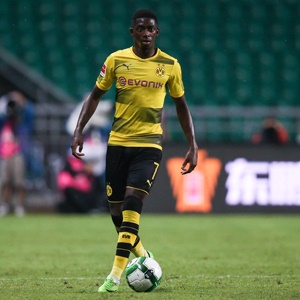 Berlin - Want-away France winger Ousmane Dembele has been told to behave more professionally by one of his Borussia Dortmund team-mates in the on-going saga surrounding a potential move to Barcelona.

Dembele, 20, has a contract until 2021 and was suspended by Dortmund last week for skipping training in a personal protest to attempt to force the German club to sell him to Barcelona.

The Spanish giants are looking for attacking reinforcements after losing Neymar to Paris Saint-Germain.

Pep Segura, Barcelona's general manager, has said they are "close" to completing a deal for Dembele as well as Liverpool's Philippe Coutinho, but Dortmund's CEO Hans-Joachim Watzke denied the claim on Thursday.

According to Spanish media, Barcelona are offering €80 million, plus a bonus of 40 million euros, but Dortmund want €150 million for Dembele - 10 times what they paid Rennes in 2016.

His suspension meant Dembele missed Saturday's 4-0 win at minnows Rielasingen-Arlen in the first round of the German Cup when Gabon hot-shot Pierre-Emerick Aubameyang scored a hat-trick.

Now Dortmund's tough-tackling defender Sokratis Papastathopoulos says Dembele should follow the example of Aubameyang, who has been linked to a big-money move to China but has been told that he is staying.

"Ousmane is a good lad, but he has to recognise that no player is bigger than the team," Sokratis told Thursday's edition of magazine Kicker.

"Everyone has to be clear that he must work for the team and fall in line. This also applies to Ousmane - he can't just do whatever he wants.

"He should take Pierre-Emerick Aubameyang as an example. 'Auba' also could imagine leaving, but he behaves professionally in every training session and every game and gives his best.

"In the first round of the Cup, he scored three goals - Ousmane wasn't there.

"Ousmane has done no good by going on strike. He should not forget that he still has a long-term contract at Dortmund."

Sokratis says he hopes Dembele will return to training soon.

He remains suspended as Dortmund prepare for their opening game of the new Bundesliga season at Wolfsburg on Saturday.

"At first he has to get in touch with us again and come to training. Then we will see," said Sokratis.

"Ousmane has given a lot for us. He is a player who makes the difference and we need players like that.

"But we also need players who don't shut themselves out and who want to be part of our family. Apparently Ousmane doesn't want that."

We live in a world where facts and fiction get blurred
In times of uncertainty you need journalism you can trust. For only R75 per month, you have access to a world of in-depth analyses, investigative journalism, top opinions and a range of features. Journalism strengthens democracy. Invest in the future today.
Subscribe to News24
Related Links
Martial: Man Utd prioritising Premier League
Loftus-Cheek: I left Chelsea at the right time
Eintracht eyeing Kevin-Prince Boateng
Next on Sport24
German FA investigates Union Berlin defender over racism allegation