'We were way off': Rashford rues Man Utd flop 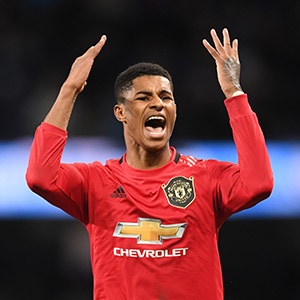 Ole Gunnar Solskjaer's side were completely outclassed in the first 45 minutes of their 3-1 League Cup semi-final first leg defeat on Tuesday.

City scored three times at Old Trafford to leave United's Wembley hopes in tatters before Rashford got one back after the interval.

Rashford knows it was an unacceptable display before the interval and he conceded they must learn from the chastening experience when they face rivals City in the second leg.

"We were way off the tempo. They changed a little bit and brought more players deeper than the last time we played against them," Rashford said.

"On the pitch we have to adapt. We have to try to control the situation better than the way we did.

"The first half wasn't a Man United performance but the second half we showed character and courage and it was more like us.

"Those key moments, we have to learn to control them better than we have done this season.

"It's a learning curve for us. We'll learn from it but it's not going to keep us down.

"We're going to put it behind us and the best way to do that is by winning the next game."

Consistency has been a problem for United, with three defeats in their last six matches, but England striker Rashford believes they have shown they can compete with their top-six rivals.

Only a month ago they beat City in the Premier League and Rashford insists there is nothing wrong with United's fighting spirit.

"Nobody started playing football to lose games. I don't think that's the problem," he added.

"I think everyone knows that we want to win and that the team is fighting. We have to continue to do that.

"Everything can improve a lot. We're probably only showing half of what we can do as a team.

"We need to keep fighting to find that extra percentage that will win us games."