Pretoria - SuperSport United are through to the Telkom Knockout semi-finals, beating Mamelodi Sundowns 3-1 on penalties after the game at the Lucas Moripe Stadium on Saturday evening had ended 0-0 after extra time.

The first half was an evenly-balanced and saw both sides with several excellent scoring chances.

The second half was the same, with several near misses and efforts hitting the woodwork. The Brazilians dominated extra time against a 10-man SuperSport, but could not find a way to score.

Sundowns were quickest out the blocks and only a smart reflex save with his feet by Ronwen Williams prevented Percy Tau from giving Pitso Mosimane's side a second minute lead.

Three minutes later Tau set up Khama Billiat from close range, but the Zimbabwean scuffed his shot and then also squandered an 18th minute opportunity when he slipped with the goal at his mercy.

It was SuperSport though who came closest to breaking the deadlock when Jeremy Brockie smacked a free kick onto the crossbar in the 23rd minute.

Williams was again on hand to bail out Matsatsantsa when he saved from Tau eight minutes before the break.

United had the first chance after the restart when Reneilwe Letsholonyane played in Brockie, but Denis Onyano saved with his feet on the angle.

SuperSport suffered a setback just after the hour mark when referee Victor Gomes issued Onismor Bhasera with a red card after he took down a goal-bound Billiat.

Hlompho Kekana was then very unfortunate to see his effort from the resultant free kick coming back off the bar.

While the game remained on a knife-edge, chances were rare, the next clear-cut opportunity arriving in the 91st minute when Letsholonyane pounced in the box, but his snap shot hit the upright before Michael Boxall fluffed the follow up.

The Brazilians should have been 1-0 inside the first half of extra time, but Anthony Laffor had his goal incorrectly disallowed for off-sides.

A man down, SuperSport found themselves doing some desperate defending to hang on until the end of the extra 30 minutes as the defending champions upped the ante in search of a winner.

A missed penalty from Laffor, and a save by Williams on Thabo Nthethe and Sibusiso Vilakazi's spot kicks, saw Matsatsantsa through to the last four. 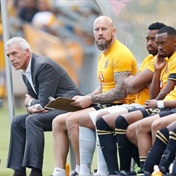