Ajax: Players are in good shape 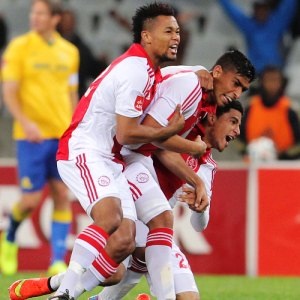 Cape Town - Head of Medical, Jantho Greyling, has been heavily involved in Ajax Cape Town’s fitness training since the start of pre-season and says that he is very happy with the way the players have responded following their return from the off season.

The players have been on a break since May, after the Nedbank Cup loss to Mamelodi Sundowns via the dreaded penalty shootout, despite competing well for the duration of the match.

Now with the players fresh and well rested for the 2015/16 PSL campaign, Greyling has put the boys through their paces in preparation for the upcoming PSL campaign.

“Training has been going very well because the guys all came back in good shape from their break,” said Greyling on the clubs official website.

“We’ve reached a good level of fitness in the last two weeks and we’ll now start getting the guys more match fit with some training matches.

“We’ve got a nice group of players and they are all very co-operative. We have about three weeks to go until we start playing some real competitive matches, so there won’t be that much running involved in training anymore, it will be more technical training.”

Ajax Cape Town and National First Division side Santos will play a practice match today (Tuesday, July 7) as Jantho Greyling along with Roger De Sa and assistant coach, Ian Taylor, looks to get the team into tip-top shape for the new season.