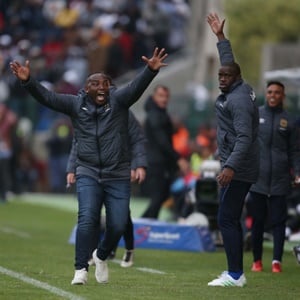 McCarthy won the MTN8 in 2018/19 and also secured a top-eight finish for the Citizens in the previous campaign.

As such, Bafana Bafana's all-time leading scorer is highly regarded as a top coaching prospect and is reportedly on the radar of a number of sides in South Africa's top flight.

Recently, Kaizer Chiefs were said to be interested in securing his services after enduring a poor campaign under coach Ernst Middendorp.

Nonetheless, Comitis has denied the 41-year-old wishes to leave as he still has ambitions of winning further silverware in the Mother City.

He told reporters: "Benni has told us he wants to win the league and other trophies with us before thinking about expanding, possibly move to Bafana Bafana and abroad.

"Our focus is looking at improving the team consistency, avoiding any distractions.

"We have our own targets as a team and if we put more effort on that we won't have any issues.

"We just want to grow gradually as a team, we can't put pressure on the boys."

The experienced football supremo also congratulated Stellenbosch for their promotion to the Premiership as he believes it will aid football development in the Western Cape.

We live in a world where facts and fiction get blurred
In times of uncertainty you need journalism you can trust. For only R75 per month, you have access to a world of in-depth analyses, investigative journalism, top opinions and a range of features. Journalism strengthens democracy. Invest in the future today.
Subscribe to News24
Related Links
Tovey: Pirates are far ahead of Chiefs
Khumalo: Chiefs defeat to Galaxy 'very hurtful'
Micho: Bucs were 'Samsung Galaxy 8 and now Galaxy 10'
Next on Sport24
Amakhosi face Champions League postponement