Chiefs move up to fourth 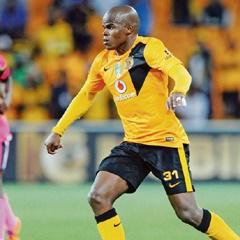 Willard Katsande of Kaizer Chiefs is expected to continue his strong play in midfield, although new coach Steve Komphela might be looking for a few fresh faces in that department. PHOTO: Muzi Ntombela / BackpagePix

Cape Town - Kaizer Chiefs bagged their first win in the New Year when they beat Bloemfontein Celtic 1-0 in an Absa Premiership match at Free State Stadium on Sunday afternoon.

A second half penalty by Willard Katsande helped Steve Komphela’s men bag the three points as they occupy the fourth spot on the log table with 25 points from 14 matches.

Both sides were chasing their first wins in the New Year and the hosts started the match with a youthful side as they dictated terms in the opening stages of the tie.

After 10 minutes of action, the Amakhosi were awarded a set piece just outside the box which Siphiwe Tshabalala took, but Celtic partially cleared the danger only for George Maluleka’s follow up shot to hit the side netting.

Just after 30 minutes into the contest, good interplay from the visitors saw Maluleka shooting narrowly wide from just inside the box.

In the 40th minute, Siwlelele wasted a wonderful opportunity to grab the lead when Jooste sent in a cross, but it went astray with nobody to finish it off.

Immediately after the resumption of the second stanza, Celtic exchanged good one touches to put Gabardinho Mhango into space, but the Malawian forward was denied by Pieterse.

Towards the 60th minute, Tignyemb showed his class when he tipped Letsholonyane’s beautiful shot from the edge of the box over the cross bar.

In the 71st minute, Amakhosi were awarded a penalty when Twala was fouled in the box and Katsande converted from the spot to hand Chiefs the lead, 1-0.

Towards the final 10 minutes of the match Siwelele tried all they could to bounce back into the encounter, but the Amakhosi successfully held on  for the win.

The loss leaves Celtic at number nine on the table with 17 points.