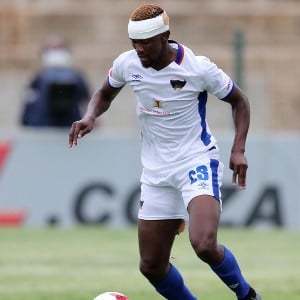 Cape Town - Chippa United returned to winning ways in the Absa Premiership at the start of the year as they beat Amazulu 2-0 at the King Zwelithini Stadium on Sunday.

A second-half brace from debutant Linda Mntambo saw the Chilli Boys register only their second away victory off the season.

Paseko Mako made two goal line clearances to ensure a clean sheet for the visitors and maintain their undefeated record against Usuthu.

The first threat at goal came from the hosts in the 17th minute when Sbusiso Mabiliso got to the byline before his pullback was poorly dealt with by Mako which allowed the ball to fall for Siduduzo Dlamini, who saw his left-footed volley cannon off the woodwork.

Neat interplay in midfield from Kurt Lentjies and Mntambo saw the latter poke a ball through for Zaphania Mbokoma to run onto only for Usuthu goalkeeper Energy Murambadoro to sense the danger and mop up the threat.

Just past the half-hour mark, Cavin Johnson's side found joy through Butholezwe Ncube, who delivered a dangerous ball into the box, but pressure from Ayabulela Konqobe ensured Ovidy Karuru to put his header over the bar.

The Chilli Boys took the lead six minutes after the restart.

The effervescent Mntambo lashed the ball home with the outside of his foot after he was well picked out on the edge of the box by Mako.

Five minutes later following a shot from Rhulani Manzini the ball fell to Mhlengi Cele, who had the beating of Brighton Mhlongo, but was denied by Mako.

The visitors doubled their advantage in the 62nd minute. A quick one-two on the edge of the area between Mxolisi Macuphu and Mntambo allowed the debutant to slot home from close range and complete his brace.

Amazulu were unlucky not to have found a way back into the contest in the 72nd minute. Tapelo Nyongo was set up by Cele but his captain could only strike the bar from six yards out.

The win sees Tebogo Moloi's side move into the top eight in seventh position, while Usuthu remain 13th with just three wins this term.

We live in a world where facts and fiction get blurred
In times of uncertainty you need journalism you can trust. For only R75 per month, you have access to a world of in-depth analyses, investigative journalism, top opinions and a range of features. Journalism strengthens democracy. Invest in the future today.
Subscribe to News24
Related Links
Newport stun Leeds, West Ham survive FA Cup test
WRAP: Absa Premiership
Bloemfontein Celtic edge Arrows in heatwave
Next on Sport24
Motsepe's 'Africa loves Trump' gaffe could affect CAF presidency bid